The Mazda2 isn't quite as practical as some rivals

The Mazda2’s facelift was mainly cosmetic, so practicality is no better than the pre-facelift model. Five adults can fit in the Mazda2 at a squeeze, while boot space is adequate, but newer rivals have really stepped up in terms of interior and luggage space. The Renault Clio, for instance, will be much more comfortable for families.

The Mazda has more room in the back than a Ford Fiesta. Although two six-footers would struggle to fit one in front of the other, five average-sized adults should be able to squeeze in without feeling too claustrophobic. The car's added width means there's extra elbow room for passengers. 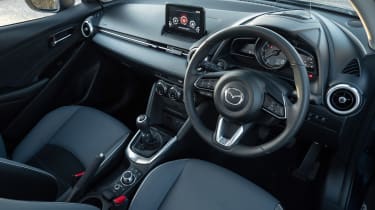 Small personal items can be carried in the large front door pockets, which have been shaped to fit bottles of water, and there are also a couple of smaller cubbies for bits and bobs and loose change. The glovebox is big enough to fit a bottle of water, but its door can sometimes hit the front-seat passenger's knees when you open it.

The Mazda2's boot is starting to look a little small in comparison to newer superminis, some of which offer over 100 litres more space. Keep the rear seats up and you'll have 280 litres to play with, while folding them down (they split 60:40 at the push of a button) increases maximum capacity to 960 litres. The latest car does without a spare wheel – you get an emergency canister of tyre-repair foam instead – which means the boot is much deeper than it used to be. It also means there's a large load lip to lift heavy items over. 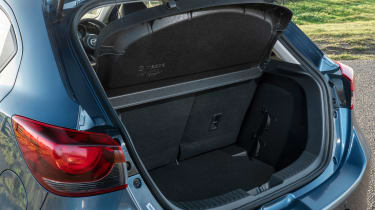 The wide boot opening wins points back for the Mazda and the bootlid is also light, making it easy to open and close. The size increase over the car it replaced means the Mazda2's boot almost matches the Ford Fiesta's 292-litre capacity, but it falls short of the SEAT Ibiza and Renault Clio, which offer 355 and up to 391 litres respectively.

While few people buy a supermini with towing in mind, should you need it to, the Mazda2 is capable of pulling up to 900kg, regardless of which engine you choose.