The Mazda2 has a classy-looking and appealing dashboard, but it’s starting to show its age

Compared to the previous Mazda2, the latest model’s interior is a far more appealing place to while away the miles. It’s more modern, too, thanks in part to a seven-inch infotainment screen fitted on all but the cheapest trim level. This has reduced the need for numerous small buttons and the result is a dashboard that's much less cluttered than the previous car's.

Build quality inside the Mazda2 is excellent, too – comparable to the classy Audi A1 in some places. Top-spec models come with stitched leather on the seats, door panels and dashboard, while there's also expensive-looking carbon-fibre trim. The car's circular air vents give things a sporty feel, while the additional rectangular vent hidden in the trim is a neat touch. 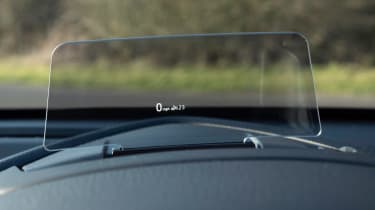 The seven-inch infotainment system makes such a difference to the Mazda2 that we recommend choosing the SE-L Nav model or higher to make sure you get it. It’s easy to operate and a rotary controller is used to select various functions. If you connect your smartphone, you can access functions such as social media and Internet radio through the central screen, too. As a whole, the infotainment system isn’t as crisp as some rivals’ screens, but it does come with Apple CarPlay and Android Auto giving you the option to use your phone’s software rather than Mazda’s.

The rest of the car's systems are easily controlled with a few buttons, while the climate control is adjusted using three chunky dials on the centre of the dashboard. One bugbear is that there’s nowhere really to put your phone or the key, which isn’t helped by some of the space being taken up by a CD player. Some rivals don’t even offer this feature any more, and it’s only an option on the Fiesta. 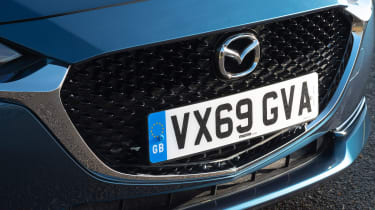 The Mazda2 is available with plenty of hi-tech equipment, whichever model you pick. The base SE-L might not come with the seven-inch infotainment system, but it does feature LED headlights, Bluetooth hands-free calling, cruise control, electric windows, air conditioning and rear parking sensors. SE-L Nav adds sat nav, DAB radio, Bluetooth audio streaming and smartphone mirroring, plus extra safety kit, and is our pick of the range.

Sport Nav increases the size of the alloy wheels to 16 inches, and adds a number of styling flourishes inside and out to make it look more athletic. These include a gloss black grille, chrome inserts and tinted rear windows. It also includes keyless entry and LED daytime running lights. Top-spec GT Sport Nav adds even more kit; the standard equipment includes a reversing camera, heated leather seats, a heated steering wheel, a head-up display and a driver attention alert system.