With seemingly every other car manufacturer using small turbocharged petrol engines that are much more efficient than what they've replaced, Mazda goes its own way. It employs what it calls SkyActiv-G technology to get the most out of its relatively large 1.5-litre petrol engine. In comparison, the Ford EcoBoost engine range starts at just a 1.0-litre capacity. For this facelifted model, Mazda has introduced mild-hybrid technology on manual cars, with a 48-volt electrical system supporting the engine and allowing the stop-start system to engage sooner.

The Mazda2 offers two versions of a 1.5-litre petrol engine, producing 74 and 89bhp respectively. Both offer fuel economy of 53.3mpg, while CO2 emissions stand at 94-95g/km for low Benefit-in-Kind (BiK) bands for company-car drivers. Only the 89bhp engine can be chosen with an automatic gearbox and this reduces fuel economy to 47.9mpg, while CO2 emissions increase to to 118g/km, putting the car in a higher BiK bracket.

Petrol-powered versions of the Ford Fiesta post similar economy figures but Ford does offer Fiesta buyers a diesel model capable of 65.7mpg. Plus, while the Mazda’s figures sound reasonable, we found the engine often needed to be worked hard to make good progress, which hurt fuel economy. 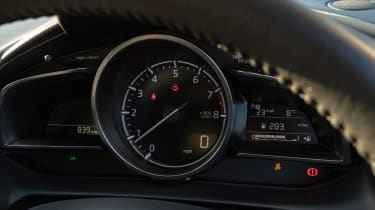 Insurance groups for the new Mazda2 range from 13 for the entry-level petrol to 16 for the top-of-the range models. This is quite high for a supermini – chief rival the Ford Fiesta sits in insurance groups five to 15.

Mazda’s three-year/60,000-mile warranty is average for the industry, with Kia offering full cover for seven years or 100,000 miles. Mazda will extend the duration of the warranty, but the cost is specific to the car you wish to cover.

Mazda offers fixed-price servicing that costs £499 and covers the car for three years or 75,000 miles. The company also has service plans that let you pay for your car’s maintenance in monthly instalments arranged with your dealer.