"With the sound and performance of a supercar but the civility of a four-seat convertible, the Mercedes-AMG C63 Cabriolet is a great all-rounder" 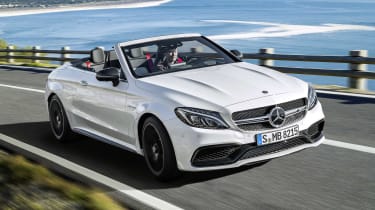 If you want to combine wind-in-the-hair thrills with supercar-worrying performance, stylish design both inside and out, four-seat practicality and a glorious engine note, then the Mercedes C63 AMG – or the Mercedes-AMG C63 as it’s now known – could well be for you.

The market sector in which the C63 operates is not a crowded one, with the BMW M4 Convertible the only car providing realistic competition until a new Audi RS5 convertible arrives. The M4 can’t match the Mercedes’ prodigious power output, however, which stands at 469bhp from its twin-turbocharged 4.0-litre V8. Go for the ‘S’ or Edition 1 version, however, and this climbs to 503bhp. 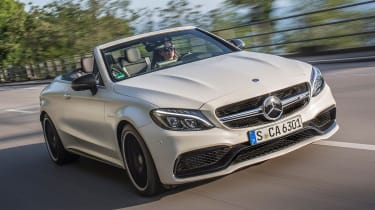 All models are rear-wheel drive and have seven-speed dual clutch automatic gearboxes as standard. This means 0-62mph is dispatched in just 4.2 seconds (4.1 in S and Edition 1 models) while top speed is electronically limited to 155mph on all versions. Any concerns you may have about the lack of aural drama associated with turbocharged engines should be put to bed, too, as the V8 sound fantastic, especially with the roof down.

With all this performance on offer, you’d expect running costs to suffer a little compared to standard versions, and you’d be right. At best, you’ll get around 31mpg, which means CO2 emissions of 208g/km and a £295 annual tax bill. We wouldn’t even bother considering one of these as a company car, but if you must, you’ll be liable for the top 37% Benefit-in-Kind (BiK) company car tax rate. 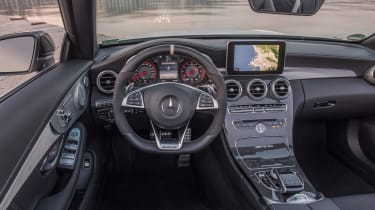 With the C63 costing at least £65,000 and rising to nigh-on £80,000 if you go for the Edition 1 model, you won’t be surprised to learn that its the best-equipped model in the C-Class cabriolet range. You might, however, be a little bit disappointed to learn that you’ve got to fork out extra for a head-up display and adaptive LED headlights.

The C-Class range – on which the C63 is based – finished 40th out of the 75 cars ranked in our 2017 Driver Power owner satisfaction survey of cars currently on sale in the UK.

People considering this kind of car are unlikely to worry too much about how much it costs to run, which is for the best because it’s not cheap. An official fuel economy average of 31mpg doesn’t sound too bad, but it’s very unlikely you’ll come to close to this figure, particularly if you drive the car with any gusto. Similarly, CO2 emissions of 208g/km don’t sound too bad, but they still result in an annual tax bill of £295.

Like most Mercedes, the AMG C-Class needs a service every year, and you can cover this by spending £45 a month on a fixed price service plan, which covers all parts and labour. As with cars made by BMW, the Mercedes C63 AMG cabriolet comes with a three-year, unlimited mileage warranty.

As with all AMG models, the Mercedes-AMG C63 Cabriolet is blisteringly quick

There’s just the one 4.0-litre twin-turbocharged petrol V8 engine available in the C63 but it comes in two different power outputs. The standard car comes with 469bhp, while S and Edition 1 models come with 503bhp.

Go for the more powerful versions, and the C63 is actually only a tenth of a second faster from 0-62mph, dispatching the benchmark sprint in 4.1 seconds, compared to the standard car’s 4.2-second time. There’s little or no difference in terms of top speed, either, with all models restricted to 155mph as standard. On S and Edition 1 models, however, you can specify the AMG Driver’s package that raises the limit to 180mph. 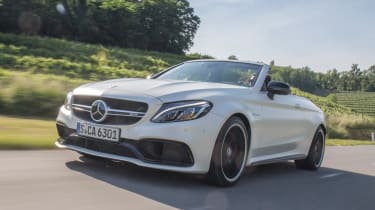 We found the standard C-Class Cabriolet rather uninvolving as a car to drive, but thankfully the AMG version is much more fun. So far, we’ve only driven the C63 S, but it steers with a great deal of precision. Meanwhile, the adjustable driver modes – that range from Comfort all the way through to Race – really have an impact.

Accelerate hard in any gear and you’ll be pushed back into your seat to a beautiful soundtrack provided by the four exhaust pipes out the back. We do advise a little caution though: while some cars of the C63’s ilk have their power heavily managed by electronic stability programmes, we found the Mercedes-AMG refreshingly old school in its approach to power delivery.

That’s great news if you’re after a performance car that requires a great deal of respect (and delivers commensurate thrills), but the C63 S is more than willing to spin its wheels when pulling away from junctions. Even on the move, the car can struggle to put down its prodigious power onto cold winter tarmac if you floor it. We should point out this isn’t necessarily a criticism, merely evidence of how used we’ve become to potent performance machines with stability systems that flatter the driver.

Settle into a cruise, however, and everything quietens down, and put the roof up and you’d be forgiven for thinking you’re in the Coupe model.

With its latest tranche of products, Mercedes has really stepped up its game when it comes to interiors and the C63 is no different. All the materials on show are of top quality, while all the controls are easy to use, as is the infotainment system.

It also looks lovely, with plenty of leather all around, as well as aluminium trim, which gives it a modern, sporty feel. The rest of it, though, is just like the standard Mercedes C-Class Cabriolet, which is only a good thing.

The car’s leather seats are very comfortable, too, and in Comfort mode, the suspension will easily soak up the worst of the lumps and bumps in most surfaces without compromising handling much.

The C63 is a strict four-seater, so if you need to drive four adults around on a regular basis you ought to consider the saloon instead. Having said that, there’s a decent amount of legroom in the back and, although headroom is a little tight it’s better than under the folding hard top in the BMW M4 Convertible.

Boot space is OK, although not quite as generous as the M4 with the roof up, where its 355-litre load area loses out marginally to the M4’s 370-litre boot. With the roof down, however, the Mercedes offers much more space, with 255 litres available, compared to the BMW’s 200-litre offering. This means you’ll have enough space for some squishy bags on a weekend away but might struggle to fit in the week’s supermarket shopping if you’ve got the roof down.

The Mercedes C-Class was rated average for reliability in our 2017 Driver Power owner satisfaction survey of cars currently on sale in the UK. Of the owners who responded, 12.9% reported experiencing a problem with their car at least once.

We’re more confident about the C63’s safety credentials. Although neither the C63 Cabriolet not the standard Mercedes C-Class Cabriolet have been put through their paces by Euro NCAP, the C-Class saloon has.

Unsurprisingly, it scored the full five stars, and while the C63 Cabriolet may not be quite as safe due to the missing roof, we’re still confident it’ll perform well in a collision. This is partly because it shares much of its construction with the saloon, but also because of the vast amount of safety equipment that it comes with.

The C63 gets more powerful brakes, a pop-up bonnet for pedestrian safety, automatic emergency braking, attention assist and a system called Collision Prevention Assist, which helps you avoid a collision. It does this by using sensors to stop you getting too close to the car in front by automatically braking if necessary. There’s also the mandatory kit like airbags, ISOFIX points, stability control, anti-lock brakes and tyre pressure monitoring.

This is a very expensive car, but is it worth the money?

Being the top-of-the-range model – it starts at around £62,000 – there’s plenty of standard equipment, including full leather upholstery, internet connectivity, the top-level COMAND infotainment system, which includes DAB radio, sat-nav, Bluetooth and voice control, all of which is accessed via an 8.4-inch colour screen on the dash.

This means there aren’t all that many options to choose from, although Mercedes being Mercedes, it will add just about anything to your car if you can afford it. You can specify the AMG Drivers Performance Pack, which raises the top speed to a massive 180mph, as well as a variety of other exterior and interior design packages.

As for value for money, if you compare the standard C63 with the slightly lowlier C43 AMG, then the differences seem very few; you’re essentially paying an extra £15,000 to knock 0.1 seconds off the car’s 0-62mph time. If you’re in the market for this sort of car, however, having the ‘ultimate’ version may be important, and the extra visceral, aural thrill of having a V8 rather than a V6 under the bonnet makes the C63 particularly tempting. You also get the extra driving fun of a rear-drive setup as opposed to a four-wheel drive model. So whether you think the C63 is good value depends on your priorities.