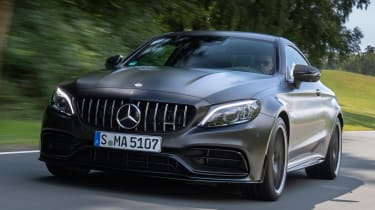 With more power than you’re ever likely to need, the Mercedes-AMG C63 Coupe is like an athlete in a smart suit – it's relatively unsuspecting to look at, but capable of evaporating its rear tyres with a flex of your big toe. But it’s not all about straight-line speed, because in a class with such capable rivals as the BMW M4 and Audi RS5, such a one-dimensional device would struggle to succeed.

In keeping with the rest of the Mercedes C-Class Coupe range, the C63 received a mid-life facelift in 2018, which has sharpened its looks as well as its reflexes. Restyled bumpers and a new AMG-specific grille give it a more potent appearance, while a nine-speed 'Speedshift' automatic gearbox brings a more urgent response when you put your foot down.

The latest C63 is the best-handling yet, feeling just as keen through a series of testing corners as it does powering down a motorway slip road. This means the ride is quite firm, but its Comfort setting does at least allow it to breathe with the road more freely. 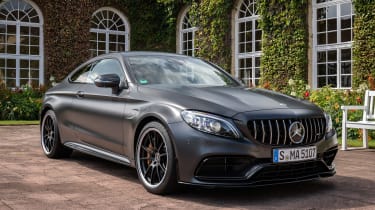 ‘Downsizing’ of engines might be more common in hatchbacks and SUVs than rorty sports coupes, but the latest C 63 has a smaller 4.0-litre V8 than its 6.2-litre predecessor. Don’t worry, though: adding two turbochargers has more than made up for the reduction in size, massaging the smaller engine to 470bhp or an even more impressive 503bhp in the C63 S. That’s enough to steal horsepower bragging rights from the BMW M4 and Audi RS4, and its four-second (3.9 seconds for the C63 S) 0-62mph time is no less impressive.

Unfortunately, bombastic V8 petrol engines and fuel economy don’t go hand-in-hand, with a figure of 32.8mpg unlikely to impress your accountant. The same goes for the C63's top-rate Benefit-in-Kind (BiK) band, making this an unlikely company car. But if you’re in the market for a car with this much power, rivals fare little better. 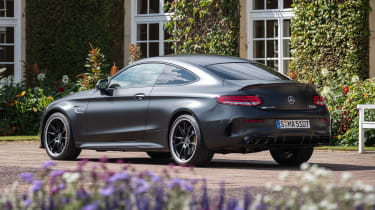 You may also be tempted by Mercedes’ interior, which is both attractive and well screwed-together. It’s not lacking in technology or standard kit, either, with LED headlights, leather sports seats and a racy steering wheel all included.

A strong showing in our 2018 Driver Power owner satisfaction survey is reassuring, with the C-Class coming 27th out of the 75 cars rated. Euro NCAP awarded the Coupe its full five stars after 2014 crash safety tests, and the C-Class is equipped with the latest crash-mitigation technology.

With its highly tuned V8, the C63 is never going to be chosen for its fuel economy

There are two ways of looking at the C63 and C63 S. On the one hand, they're enormously thirsty sports cars with a manufacturer fuel-consumption figure of 32.8mpg, which is hard to manage unless you drive very carefully. On the other, their 4.0-litre, twin-turbocharged V8 engine manages a significant step up in economy over the old C63, which had a giant, naturally aspirated 6.2-litre V8. 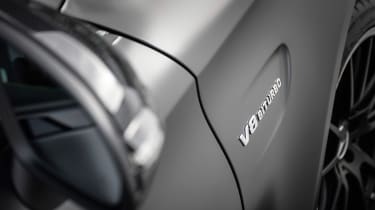 Compared to rivals, the C63 also isn’t on a different planet, slightly beating the 31mpg figure of its closest competitor, the BMW M4 with a manual gearbox, and just behind the automatic M4s' 34mpg figure. The Audi RS5 is also roughly as thirsty, posting 32.5mpg.

It’s fair to say the C63 won’t be on many company-car lists, though, sitting as it does firmly in the top 37% BiK band thanks to CO2 emissions of 200g/km. Road tax is the same as for any other petrol costing over £40,000, with a £140 annual flat rate after the first year (which is usually rolled into the on-the-road price) and a £310 surcharge in years two to six for buying a luxury car.

It still has a potent engine, but improved handling has tamed the C63 somewhat

Its engine has got physically smaller, but the C63 actually has more power than before, thanks to its turbochargers' ability to cram more air into the cylinders. Even the ‘standard’ version has 470bhp, eclipsing the 425bhp BMW M4 and 444bhp Audi RS5 and getting the Merc from 0-62mph in a supercar-bothering four seconds flat.

But if that’s not quite thrilling enough, there’s always the C63 S. This sees power increased to 503bhp and nudges 0-62mph acceleration into sub-four-seconds territory. There aren’t many faster cars with a back seat.

Performance isn’t just about the numbers, though: the C63 delivers across the board. Its exhaust burbles at a standstill and intensifies to a potent growl as you accelerate, unleashing occasional cracks as gearchanges punctuate its onslaught. The firm ride gives away the fact this is no ordinary coupe, but in Comfort mode there’s enough elasticity to take the edge off most bumps.

The reward for this firm chassis is iron-clad control over the car when you need it, with almost no body lean at all in corners and more agility than you might expect from such a bruiser. 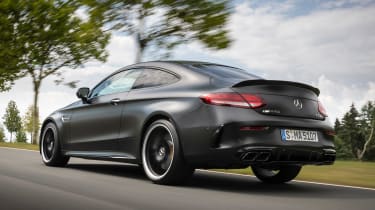 Previous iterations C-Class AMGs garnered a reputation for being German hot rods, but the latest C63 Coupe has a broad repertoire. Some purists may bemoan the lack of a manual gearbox, but the nine-speed 'Speedshift MCT' automatic is well up to the task of dealing with all that power, as well as being as responsive as you could want. The C63 S model also boasts AMG Dynamic Select, which provides six driving modes, with Comfort, Sport, Sport+ and Race joined by a special 'Slippery' mode that caters for low-grip conditions.

There's a nine-stage traction-control system, too, which was first seen on the Mercedes-AMG GT R sports car. This allows you to tailor how power is delivered to the rear wheels, which means experienced drivers can dial in a certain amount of wheelspin.

When you tire of burnouts at your local track, the C63 can also cruise happily on the motorway for mile after mile, with no more fuss than a standard model.

Performance doesn’t have to come at the cost of luxury

If a bare-bones sports car with a stripped-out interior is your idea of a nightmare, the C63 could be perfect, offering as much in the luxury department as the performance arena. Not only do you get everything from the standard C-Class, but there are also memory front seats and exterior mirrors that adjust to your selected settings every time you get in. The seats themselves are different from the regular car's, too – upholstered in nappa leather and more heavily bolstered to keep you in position during neck-straining corners. 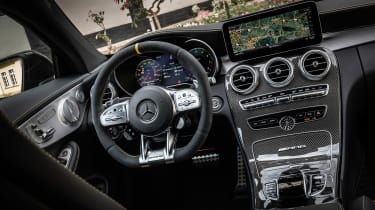 Sporting touches abound, like the AMG instrument cluster with evocative red needles and the flat-bottomed steering wheel. Ambient lighting (with three colours and five brightness settings) adds to the interior’s character after dark, when the LED headlights also help you see the road ahead better. 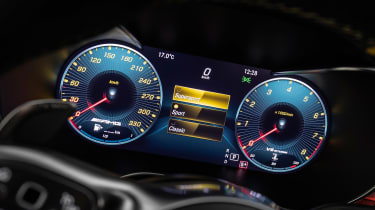 The COMAND Online infotainment system is logical and easy to use and the latest version offers an updated 10.23-inch infotainment screen, while the driver sits behind a 12.3-inch fully digital dashboard that can be configured to display a number of information types. If you upgrade to the Premium Equipment Line you'll gain a soft nappa leather finish on the dashboard and doors, along with hands-free entry, keyless start and a powered boot. You’ll also be bathed in light by the panoramic electric sunroof, and music thanks to a Burmester 13-speaker stereo.

The C63 is very comfortable for two people, but not so good in the back

Space in the front of the C63 is excellent, with lots of legroom and comfortable seats that can adjust in myriad directions. It’s a different story in the back, though, because not only do passengers have to navigate their way through the front doors, there’s simply not much room. Yes, compared to something like a Porsche 911, the seats can actually be used by adults, but headroom is quite tight because of the teardrop-shaped roofline and kneeroom is also at a premium.

Considering the Mercedes-AMG C63 is also available as a saloon or estate, practicality probably isn’t the number-one concern of most C63 Coupe customers. And for them, the 355-litre boot may be perfectly adequate. However, it’s 45 litres smaller than the regular C-Class Coupe and offers 90 litres less space than a BMW M4, making it small for the class.

The C63 is a car you can buy with eyes wide open, thanks to a strong record here

The C63 is a car you can buy with eyes wide open, thanks to a strong record here

It appears you can buy a C63 with your sensible hat on – poor fuel-economy figures aside – because it should serve you well as far as safety, reliability and satisfaction are concerned. The C63 didn't individually feature in our 2018 Driver Power owner satisfaction survey, but the C-Class it's based on finished in a respectable 27th place out of 75 cars scrutinised.

Owners rated the C-Class particularly strongly for engine, gearbox, ride, handling and styling inside and out. Comfort was praised, too, and its perceived safety was extremely highly regarded. Running costs were less celebrated, though, and 18.1% of owners reported at least one fault in the first year of ownership. 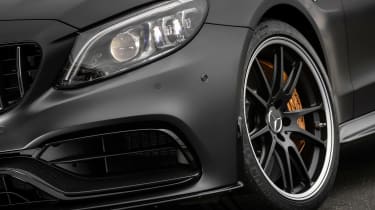 Looking at safety, the C-Class Coupe beneath the pumped-up C63 bodykit came away from Euro NCAP crash tests with the full five stars. It scored strongly across the board, with 92 and 84% for adult and child occupant protection respectively, 77% for pedestrian safety and 70% in the Safety Assist category.

The latter scores a model based on its safety technology, which the Mercedes has in abundance. There’s a device to alert drowsy drivers to rest and Collision Prevention Assist Plus, Mercedes’ system to warn you or even brake automatically if a crash is imminent.

Lots of power for the money, but the Mercedes C63 isn’t at all cheap

Be under no illusions, the C63 Coupe is an expensive car, costing over £60,000, while the C63 S will set you back around £7,000 more. This isn’t out of kilter with its close rivals, though; the BMW M4 and Audi RS5 are just as pricey. You also get a lot of performance for your money, brought into sharp focus by the fact an entry-level Porsche 911 with 365bhp starts from just under £80,000.

It’s certainly possible to tip the C63 into 911 territory with options, though, with the Premium Equipment Line adding £2,600 in one fell swoop. Systems to make life easier on the move include the Lane Tracking Package, which helps keep you in lane and warns of cars in your blind spot. To make the looks even more hardcore, there’s a pack to add carbon-fibre around the exterior, with a separate one for inside. An AMG Night package sees chrome elements finished in glossy black, while ceramic brakes help reign in the engine, but cost over £4,000. 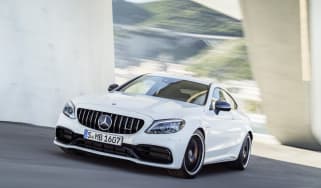