Mercedes has a good reputation for reliability, safety and customer care

Just because the S-Class coupe will sell in relatively small numbers compared to more mainstream models like the Mercedes A-Class, Mercedes C-Class and Mercedes E-Class, that doesn't mean it can get away with being any less dependable.

Unfortunately, reliability isn't always seen as a Mercedes strong point. Our 2018 Driver Power owner satisfaction survey revealed that 12% of owners experienced at least one fault in the first year of ownership. Expensive dealer servicing was criticised, too, and these factors influenced the brand's overall placing of 20th out of 26 manufacturers surveyed.

Understandably, too few S-Class Coupe owners participated in the survey for it to be covered specifically, but it's hard to imagine that Mercedes driver's complements on ride, handling, acceleration and build quality being any less relevant for the flagship than they are for lesser models in the range. 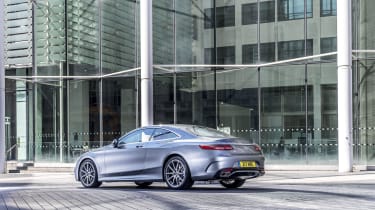 As it's a very exclusive model, the S-Class Coupe hasn't been crash-tested by Euro NCAP. However, all versions have plenty of safety equipment, including eight airbags, a system that can read road signs and a driver drowsiness monitor. There's also a clever system to control body roll in corners and keep the car steadier during strong crosswinds.

The Mercedes S-Class Coupe can also be fitted with a Driving Assistance Package, which adds blind-spot monitoring, lane-keeping assistance, adaptive cruise control and a night-vision camera.