The S-Class Coupe gets off to a good start for driver enjoyment – the S-Class saloon on which it's based is one of the best-handling executive limousines currently on sale. However, at over 2,000kg, the two-door weighs pretty much the same as its sister, so physics dictate it can't match the nimble, agile feel of some lighter rivals.

This doesn't mean the coupe can be written off as just another boulevard cruiser, though – it sits on a slightly shorter wheelbase (the distance between the front and rear axles) than the saloon and is that little bit more maneuverable in corners. Considering its vast five-metre length, the S-Class Coupe really does feel wieldy and obedient and can be shown a series of demanding corners with some confidence thanks to accurate, nicely weighted steering and a body with little tendency to lean.

This is true of the S560, which blends huge motorway comfort with surprising back-road agility, but the S 63 takes things to the next level. Expertly AMG-tuned Airmatic air-suspension lends even more stability in corners, while the Dynamic Select controller allows greater responsiveness from the engine in Sport or Sport+ modes. It also introduces another ingredient lacking in the S560 – noise. 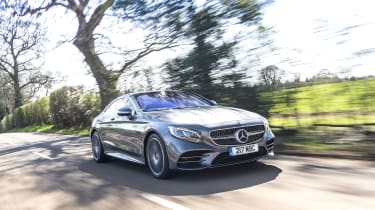 While comfort mode offers the same pleasing, distant exhaust rumble in either model, Sport+ in the S 63 unleashes a far more animalistic character, with the kind of drag-strip roar that enthusiastic drivers crave. But it's only there when you want it to be. Click the selector back into comfort and everything settles down and huge distances can be covered in almost surreal comfort, especially where Active Curve tilting and Magic Body Control are fitted.

These systems use cameras to scan the road, pre-warning the active air-suspension system of upcoming imperfections, as well as helping to keep the car flat in corners by tilting the car in a direction opposed to its natural direction of lean. These effects are even more keenly felt when you're driving with vigour and the Coupe's latest engines make this all the more tempting.

In 2017, the previous 4.7-litre S500 was replaced by the 4.0-litre S560, the bigger number reflecting a boost in power from 449bhp to 463bhp, enough to take the two-tonne leviathan from 0-62mph in just 4.6 seconds. A modified version of the same engine is now found in the S63, too, but boosted to some 604bhp. This brings the 0-62mph blast down to a scant 4.2 seconds. Top speed is electronically limited to 155mph, but the AMG Driver's Pack unlocks a 186mph capability once you've sat the firm's driving course.

Both cars now employ a nine-speed automatic gearbox, which is AMG-optimised in the S 63 for more responsive gear changes, but the S560 still changes gear very promptly and with uncanny smoothness.

The S 65 Coupe, meanwhile, maintains the previous seven-speed gearbox along with its 6.0-litre V12 that produces 621bhp. This is the fastest of the lot, racing to 62mph from rest in just 4.1 seconds, accompanied by an unmistakable 12-cylinder howl. For some, only this engine will do, but it's hard to imagine anybody being disappointed by the far less expensive V8-engined S560.