Often, squeezing in electric motors and batteries makes electric and hybrid cars a lot less practical than conventional versions, but Mitsubishi has managed to fit all the necessary hybrid technology into the Mitsubishi Outlander PHEV without encroaching too much on interior space.

With plenty of legroom and enough headroom for tall adults, rear passenger space is good. You get three full seatbelts, and with a relatively flat floor, even the middle-seat passenger has somewhere to put their feet. For the 2018 facelift, Mitsubishi also added rear-seat air vents for and more convenient USB ports to make charging portable devices easier. 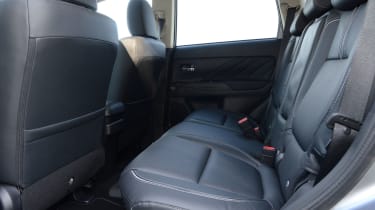 The biggest difference between the PHEV and the conventional Outlander is the lack of a seven-seat option, due to the extra space taken up by the batteries. Aside from this, boot space drops by just 14 litres, so the PHEV still has an adequate 463 litres of luggage room.

The lip-free opening makes it easy to load heavy items, while the rear seats split and fold 60:40. The rear seat bases also tumble forward, so when the rear seat backs are folded they sit flat with the boot floor, providing a big load area. 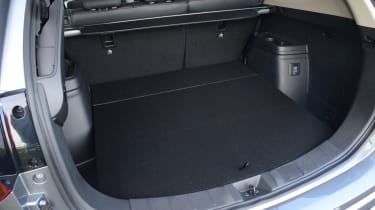 The wheelarches intrude somewhat, but in spite of the batteries and electric motor mounted in the floor, there's still a useful cubby under the boot floor, which is perfect for storing the PHEV's charging cable. However, this does mean there's no room for a spare wheel – you have to make do with tyre-repair foam instead.

If you're serious about towing, then the standard petrol Outlander is a slightly better bet. That version can tow a 1,600kg braked trailer, compared to the 1,500kg limit applied to the PHEV. This is comparable to hybrid rivals like the Toyota RAV4, which can tow up to 1,650kg when equipped with four-wheel drive.