The Mitsubishi Outlander PHEV is quieter than the diesel, but its interior is a bit drab

With a height-adjustable driver's seat and a wheel that adjusts for reach and rake, the Mitsubishi Outlander PHEV offers plenty of scope for getting comfortable behind the wheel. The high SUV seating position and large windows give you a commanding view of the road.

The only blind spots come from the large door mirrors and wide pillars surrounding the rear window. Fortunately, a reversing camera is standard on all but the most basic version – and even this model has rear parking sensors. Sadly, the sat-nav system is fiddly and complicated to use, with an aftermarket feel.

The Mitsubishi Outlander PHEV is much quieter than a conventionally powered Outlander, even when the petrol engine is running. This engine is predominantly used to generate electricity for the batteries rather than to turn the wheels directly, so it doesn't have to work as hard as the engine in a normal car.

And because you're more likely to notice road and wind noise when there's no engine sound to concentrate on, the PHEV gets extra sound deadening to make the interior even more hushed.

Sadly, the heavy PHEV's suspension is harder than the normal Outlander's, to cope with its extra weight, and it can feel jarring and unsettled on poor-quality roads. Key rivals like the Mazda CX-5, Kia Niro and Nissan Qashqai also have more comfortable suspension.

The Mitsubishi Outlander has a very conventional interior, with a simple dashboard layout, straightforward switchgear and chunky buttons. As part of an update in 2018, Mitsubishi fitted a revised centre console to accommodate an electronic parking brake and also fitted some ambient lighting strips. Nevertheless, while the interior is functional and easy to live with, it doesn't look or feel as special as the technology under the skin. 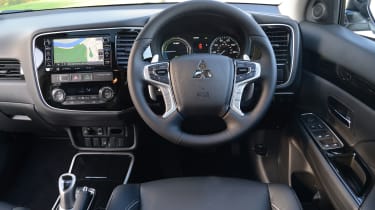 Some of the plastics inside feel a little cheap and you don't have the same sense of being in something futuristic that you get in more expensive electric cars such as the BMW i3 and Tesla Model X. So if you want an alternative-fuel car with some design flair, then the PHEV will disappoint.

The Mitsubishi Outlander PHEV is available in four levels: Verve, Design, Dynamic and Exceed. The entry-level model gets a list of standard kit including 16-inch alloy wheels, heated front seats, rear parking sensors, DAB radio, cruise control, dual-zone climate control and keyless go, but you only get a basic-looking radio unit instead of a touchscreen. 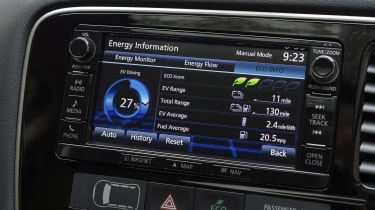 As with most Mitsubishi models, there isn't much scope to add options, but there is a big range of dealer-fitted accessories. These include interior and exterior protection like rubber mats and mudguards. You can also add a drop-down DVD player and screen to the roof, which is handy for people with small children.

For business users, Mitsubishi sells an Outlander PHEV commercial version, which does away with the rear seats to turn this SUV into an eco-friendly van. A rubber floor and blocked-out side windows add to practicality. This SUV van comes in two trim levels, Reflex and Reflex Plus, with the Plus model adding bigger wheels and a rear-view camera for about £800.