The Mitsubishi Outlander PHEV is very safe and should be reliable

Mitsubishi has a lot of experience with electric vehicles, while the Mitsubishi Outlander PHEV has proven to be a big sales success in key plug-in car markets like the Netherlands, Japan and the Nordic countries, as well as in the UK. In January 2018, Mitsubishi announced it had sold 100,000 Outlander PHEVs in Europe – an impressive milestone.

The Outlander reappeared in our 2020 Driver Power customer satisfaction survey after several years out, where it was ranked the 67th best car on sale. Its best feature was deemed to be its practicality, while a near-average proportion of owners reported a fault in the first year. The Outlander wasn’t rated too highly for reliability, suggesting that cars picked up quite major faults or that repairs took too long.

Mitsubishi’s 16th out of 30 position in our brand survey is a bit better. Despite its rather poor showing in our survey, feedback is generally quite positive about the Japanese manufacturer’s cars. This includes praise from owners on practicality and the smooth, quiet engines on offer, although its infotainment systems need to improve to please owners. 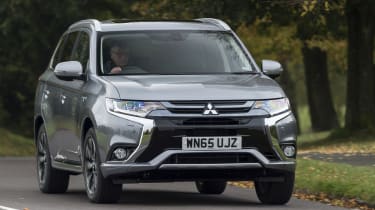 The PHEV is 200kg heavier than the standard Outlander, so it was crash-tested separately by Euro NCAP and passed with ease, receiving the maximum five-star rating. The car is also packed with safety features, including side, curtain and knee airbags, electronic stability control and a speed limiter.

The Dynamic and Exceed can be equipped with a safety pack. Forward collision mitigation system is fitted, which uses the adaptive cruise control's radar to keep an eye on traffic ahead to warn if you fail to notice stopped cars. You also get lane-departure warning, which warns you if you drift out of your lane on the motorway, plus adaptive cruise control and auto high-beam assist. There’s also a ‘misacceleration mitigation’ feature, which aims to prevent the car accelerating when it thinks you meant to brake.