With reasonable prices and low fuel bills, the Mitsubishi Outlander PHEV is affordable to buy and run

The Mitsubishi Outlander PHEV has a petrol engine and electric motors, but it's a plug-in rather than a normal hybrid. The difference is that a plug-in hybrid has a much larger battery pack, that can be charged at home. That means if you only ever travel short distances, you'll rarely use any petrol at all.

Although the Outlander PHEV has an increasing number of rivals, the majority are traditional hybrids, which don't have a substantial electric-only range, or expensive plug-in hybrids which are currently far larger or smaller than the Outlander, or carry a steeper price tag (or both).

You won't have to pay the London Congestion Charge because it comfortably returns less than 75g/km of CO2 and can be driven for the required minimum of 20 miles emissions-free. The Outlander PHEV costs £140 to tax annually, and for versions costing £40,000 or more, the first five tax bills are £465 each thanks to the yearly surcharge of £325. 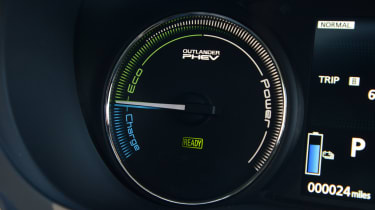 The economy figures are just half the story, though, because the PHEV has a WLTP figure of 28 miles on battery power alone. We found that 25 miles was quite achievable, which means you could make big savings if you have a short daily commute or a regular low-mileage school run. Provided you can plug in and charge either at home or at work, these short journeys can be done without using any petrol at all.

The lithium-ion battery can be charged from a standard domestic socket in five hours, while a dedicated electric-car charger can give an 80% charge in just 25 minutes. If you have off-road parking, you can get a charger fitted at your home affordably with the help of a government grant. A full charge on a standard electricity tariff will cost between £1 and £1.50. Several companies offer pre-paid cards for these charging points.

However, the extra weight of the electric technology makes the Outlander a heavy car, so if you do lots of miles with the battery depleted, you're likely to achieve around 40mpg. The PHEV's residual values also aren't as strong as the conventional Outlander's, so you’re also likely to lose a little more money come part-exchange time.

The PHEV’s insurance & ratings range from group 23 to group 29 depending on which trim level you choose, and speccing the safety pack (optional on Dynamic and Exceed) puts these trim levels in lower groups than cars without this pack.

The Mitsubishi Outlander PHEV comes with a five-year/62,500-mile warranty, although the electric motor components are only covered for unlimited mileage up to 24 months after purchase. As with other Mitsubishi models, there's a 12-year corrosion warranty and three years of Europe-wide breakdown recovery.

In spite of the hi-tech petrol and electric motor set-up, the PHEV has the same 12,500-mile service interval as the petrol Outlander. Mitsubishi's Servicing Plan fixes the price of the first three scheduled services, but maintenance isn’t as cheap as it is for some of this car’s conventionally powered non-hybrid rivals.