Everything you need to know about the new Dacia Duster 2014 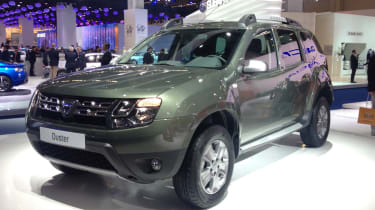 The new Dacia Duster facelift was revealed this year at the Frankfurt Motor Show 2013, featuring a range of updates and a fresh new look. Although the new Duster isn’t expected to come out in the UK until 2016, it provides a first glance at the next version of the CarBuyer Car of the Year 2013.

It’s a popular car because it offers superb value for money, being the cheapest 4x4 you can buy as well as being a practical family car for very little money. Read on for everything you need to know about the new Dacia Duster 2014.

The new Dacia Duster isn’t expected in the UK yet, but we expect to see a 2016 release. We also expect that some of the interior updates will be applied to the current-shape model from 2014.

There are no details on price yet, being so far into the future, but at the moment the Dacia Duster is the cheapest compact SUV you can buy, costing from £8,995 for the entry-level Access model. The equipment in this spec is quite sparse, not even getting air-conditioning, a radio or stability control.

The Ambiance specification adds a few more accessories to the Duster, getting body-coloured bumpers, tinted windows, fog lamps, and a CD radio with USB and Bluetooth. This model costs just £11,595, which undercuts many of its rivals. The top-spec Laureate model is also good value compared to its rivals, with alloy wheels, electric rear windows, electric mirrors, trip computer and air-conditioning as standard.

There are no concrete details on the inside of the new Dacia Duster yet, but expect a more modern and updated interior. The exterior design changes for the European Dacia Duster models include a new grille and updated headlights, as well as redesigned roof rails and 16-inch alloy wheels with off-road tyres. The rear of the updated model features new badges and taillights.

David Durand, Head of Styling for the Duster, said: “We built on the appeal of the original model and its proportions. Identity components such as the grille have been modernised. We have also strengthened the 4x4 cues of the vehicle, while keeping all its useful features.”

Electric cars are growing in popularity all the time, and even budget brand Dacia is likely to produce one, potentially a version of the Duster or Sandero. The company argues that as costs come down for producing these types of vehicle, it will be possible for the company to produce a cheap electric car that offers great value for money.

The Dacia Duster range isn’t close to featuring an electric model just yet, but it is still an excellent value and practical family car. It’s such good value, in fact, that it won our Car of the Year award this year. There's no other car on sale in the UK that can match it for sheer value, and that’s why so many are eagerly anticipating this new Dacia Duster 2014.