Most powerful production MINI ever is cheaper than Golf GTI, priced from £23,000

Full details of the new MINI John Cooper Works edition have been announced, following its reveal at the Detroit Motor Show in 2014.

The new hot hatchback is the most powerful road-going MINI to date, producing 231bhp from its 2.0-litre turbocharged engine, and is priced from around £23,000. 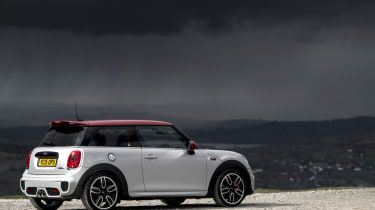 Its design stays largely true to the concept car that was unveiled at the 2014 Detroit Motor Show, with a chunky bodykit, 18-inch alloy wheels and full LED headlights. Flashes of red run through the grille and the alloy wheel designs are reminiscent of the stripped-out, limited-edition Mini GP model. A huge range of customisation options, including an exclusive Chili Red roof colour, will allow owners to make their car stand out from the crowd.

MINI makes special mention of the unique John Cooper Works exhaust, which will be exclusive to the high-performance model. It should make the new MINI JCW sound like a sports car when accelerating, as well as giving it a power boost to help it keep up with rivals like the Renaultsport Megane and VW Golf GTI.

Also highlighted are new big brakes supplied by Brembo, which suggest that the MINI JCW will stop faster than any other model in the MINI range. A fun driving experience is at the core to the new JCW's appeal, so all versions will feature firmer suspension than lesser models in the range.

The new MINI JCW features a tuned version of the 2.0-litre turbocharged petrol engine from the MINI Cooper S. The power jump (from 189bhp in the Cooper S to 231bhp here) ensures the latest John Cooper Works version is the most powerful MINI ever created. Its 0-62mph time stands at 6.1 seconds with the new Steptronic eight-speed automatic gearbox, or 6.3 seconds with a six-speed manual. That means the new hot MINI will be capable of trouncing the new Vauxhall Corsa VXR and the popular Ford Fiesta ST. 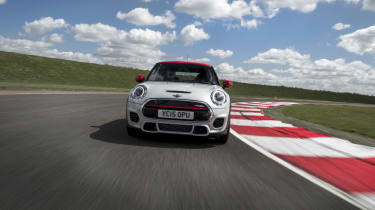 The new JCW features the same ‘MINIMALISM’ fuel-efficiency technology as the rest of the range. When equipped with the six-speed manual gearbox, fuel economy can reach 42.2mpg and emissions are 155g/km. The Steptronic automatic model is more efficient, managing up to 49.6mpg and emitting a more respectable 133g/km of CO2.

On sale now, priced from £23,050, the new JCW is cheaper than a Volkswagen Golf GTI, but more expensive than a Ford Fiesta ST. Opt for the automatic gearbox version, and it'll add £1,330 to the price tag. The large choice of options, that include a Harman Kardon sound system will add significant amounts to the price tag. 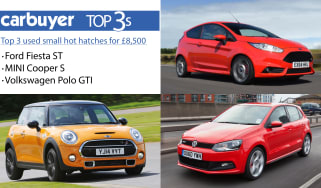