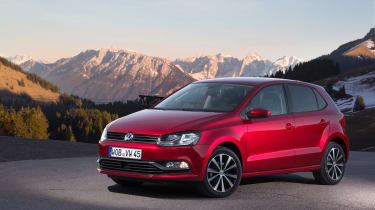 The new Volkswagen Polo will be available to order in the UK from 23 April and improves on the outgoing models with more efficient engines, clever new gadgets and updated styling both inside and out. An efficient and sporty plug-in hybrid Volkswagen Polo GTE is also being added, whilst the quick Volkswagen Polo GTI hot hatchback also gets a refresh.

Look closely and you’ll notice subtle exterior changes to the VW Polo’s styling. At the front is a redesigned bumper, larger air intake and new chrome strip on the grille, while the larger Volkswagen Golf has clearly influenced the rear.

New front and rear lights have been added, while LED headlights make the top-spec model look even more distinctive.

The Volkswagen Golf’s design and practical gadgets also feature inside. The new Volkswagen Polo gets a three-spoke steering wheel and the infotainment system from the Golf, and even entry-level S models get a five-inch colour touch screen. Higher spec cars get a larger 6.5-inch touch screen that recognises approaching hand gestures, as well as USB and Bluetooth phone connectivity as standard.

Paying an extra £700 on SE cars gets you a navigation system, and another £150 pays for the Mirrorlink system. This connects your Android smart phone to the touch screen and allows use of features such as Internet radio, news services or navigation info. Other optional gadgets include automatic wipers, electronic climate control, electronic slide glass sunroof, electric folding door mirrors and xenon headlights.

Plenty of safety features are also fitted, including accident assist systems that slow the car down whenever the installed radar senses traffic ahead. There’s also electronic stability control, hill hold and an automatic post-collision braking system that brakes the car after a collision to reduce the chance of a second impact. Optional safety features on the Volkswagen Polo include £500 adaptive cruise control and the £25 driver alert system that warns the driver if they doze off or lose concentration. Drivers can also get a sportier ride by changing the stiffness of the suspension using the optional Sport Select suspension technology.

Arguably the most important change to the new VW Polo is the engine range, which has been completely overhauled with efficiency increased by up to 21 per cent on some models.

Petrol engines are available in three 1.0-litre engines, two 1.2-litre TSI turbo petrol engines and a 1.4-litre engine that cleverly switches off some of its cylinders – that could otherwise waste fuel when cruising on the motorway – when it isn’t needed.

The 1.0-litre engine from the Volkswagen up! has been turbocharged for the TSI BlueMotion model, and VW claims it will emit just 94g/km of CO2 and do 69mpg. This will be available towards the end of 2014, and should prove a popular option for younger buyers seeking cheap car insurance.

A 189bhp petrol engine has been fitted to the quick VW Polo GTI, making it more powerful than the older model. It’s an important move from VW, as cars like the Ford Fiesta ST, Peugeot 208 GTI and new MINI Cooper S aim to take an increasing proportion of the fast hatchback market.

First orders for the 2014 Volkswagen Polo will be taken on 23 April 2014 with a starting price of £11,100. Initial deliveries are expected to arrive in late July.

The fast new Volkswagen Polo GTI will not go on sale until next year – priced from around £19,000 – but it could worth the wait. Both a seven-speed DSG automatic gearbox or six-speed manual gearbox will be available and the Volkswagen GTI’s 1.4-litre petrol engine’s power will increase from 177bhp to 189bhp, which means it should go from 0-60mph in around 6.5 seconds.

Arguably the most intriguing model scheduled for 2015 is the Volkswagen Polo GTE plug-in hybrid, which should provide brisk performance and rock-bottom running costs by combining a small petrol engine with an electric motor. Resulting economy figures of around 200mpg and 30g/km of CO2 emissions are impressive and, while this gives it an expensive price tag, the Government’s £5,000 electric car grant should lower its cost to around £20,000.

For more information on the Volkswagen range, visit the Carbuyer VW reviews page. 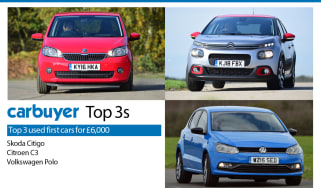