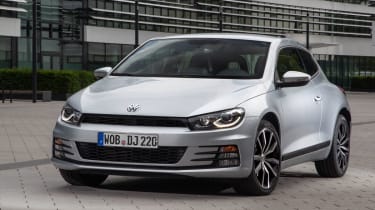 Prices have been announced for the new Volkswagen Scirocco, which is available to order now. The entry-level 1.4-litre turbocharged petrol model is priced at £20,455, with prices rising to £33,795 for the sporty Volkswagen Scirocco R.

The outside of the car has been refreshed to bring it up to date with the newer cars in the Volkswagen range. A revised front bumper is taken from the latest Volkswagen Golf GTI and the rear bumper has been reshaped for a sportier appearance.

The Scirocco has new front and rear lights, with all models now getting LED tail lights as standard. Optional bright xenon headlights also feature LED daytime running lights. Other smaller updates include the Volkswagen badge on the boot lid now functioning as the release handle, as it does on the current Volkswagen Golf.

Sales of the outgoing Scirocco fell from 7,538 in 2009 to 5,029 in 2013 and VW will hope that the introduction of six new, more efficient petrol and diesel engines will combine with the refreshed look to reignite sales of the coupe.

All of the engines meet new EU6 emissions regulations and are both more powerful and more efficient. The most frugal petrol engine is the 1.4-litre, which will do 52.3mpg and emits 125g/km of CO2 for road tax of £110 per year. The 148bhp 2.0-litre diesel engine is the most efficient in the new Scirocco range, capable of 67.2mpg and CO2 emissions of 109g/km for annual road tax of £20. The cheapest Scirocco with this engine costs £23,175.

Inside, the dashboard of the new Scirocco has been updated with new-look dials, which pay tribute to the 1974 model.

The range-topping VW Scirocco R comes with a unique bodykit for a more aggressive, sporty look. It will also get the bi-xenon headlights as standard, as well as R-specific sports seats, lower sports suspension and dynamic chassis control - a system that allows the driver to adjust the car’s setup for comfort or performance.

Volkswagen began taking orders for the new car yesterday and expects first deliveries to be made in October.

For more information on the current Scirocco, plus reviews of other cars in the current VW range, head over to Carbuyer’s Volkswagen reviews page.