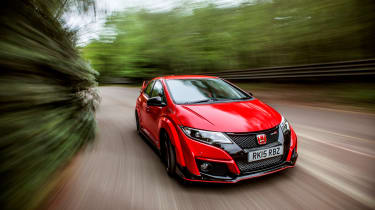 The Honda Civic Type R was one of the most highly anticipated cars of 2015, and we've got everything you need to know about Honda's hottest ever hatch. We've even driven the car, and you can read our review by clicking here. Alternatively, you can watch our video review. Read on to learn more about the car.

Following the Type R's launch, the first production models rolled off the prodution line at Honda's manufacturing plant in Swindon.

The 2015 Civic Type R is filling a long-standing void, as the last model was phased out of Honda’s range back in 2010. After preview versions of the latest model appeared in the metal at the 2013 Geneva and 2014 Paris Motor Shows, Honda was whetting hot hatch fans’ appetites for more than a year. Here's what Carbuyer's own Mat Watson thought of it when he reviewed one of the first UK examples in June:

Honda is calling the latest Type R the most extreme car it’s ever built, and the car's appearance certainly fits this description, whether you see it in photos or in the metal. We've seen aggressive styling on previous Type Rs but the latest model takes this to another level.

Honda targeted driving enthusiasts in the run up to the Type R's official launch, giving people the chance to experience the car as passengers at the Goodwood Festival of Speed's Moving Motor Show. Driven by professional racing drivers, the Civic Type R was launched up the First Glance section of the famous Hill Climb. 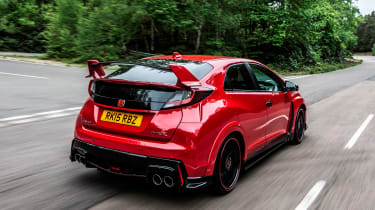 The Type R uses a 306bhp 2.0-litre turbocharged petrol engine and Suehiro Hasshi, leader of the Type R project, has gone on record saying: "The engine in this new Honda Civic Type R is unrivalled against all of them [past road-going Hondas] in terms of raw power, torque and engine response."

Soichiro Takizawa, managing director of Honda UK, said: "The new Civic Type R is an imperative model for Honda, representing our racing spirit and demonstrating our commitment to innovation and passion. We are extremely proud to be the only manufacturer of the Civic Type R in the world."

While the engine’s power is impressive, a steering wheel-mounted button labelled '+R' gives the Civic a dual character. Pushing it makes the engine more responsive and sharpens up the steering. This is seen in 'The Other Side', the promotional campaign for the Civic Type R, which won the Car Advertising Campaign award at this year's Auto Express New Car Awards.

This is in addition to the car’s four-stage adjustable suspension dampers, which allow the driver to choose between comfortable and (if past sporty Hondas are anything to go by) much firmer suspension setups.

Modifications to the front suspension aim to cut out torque steer – the writhing sensation that powerful front-wheel-drive cars suffer from during hard acceleration. The Type R is only available with a six-speed manual gearbox. 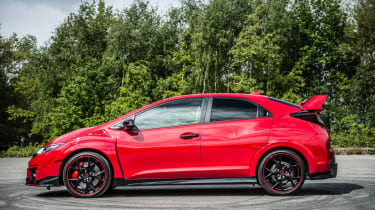 The Honda Civic Type R is priced from £29,995, in order to compete with rivals such as the Ford Focus ST and the Volkswagen Golf GTI, and the car is on sale now.

The GT version costs around £2,300 more and adds automatic lights and wipers, dual zone climate control, parking sensors, and the Honda Connect infotainment system with an upgraded stereo and Garmin sat nav to the equipment list.

The Honda Civic Type R is the quickest ever Civic by some margin, and there's nothing particularly understated about the styling; it lets you know exactly what the car is all about.

The Type R features a large, ground-hugging front bumper with huge air vents and striking LED lights. The red Honda badge denotes that this is a Honda performance car, and there are more LEDs in the main headlight housings, as well as two air vents in the bonnet to aid engine cooling.

Even from the front the car’s extended wheelarches are easily spotted. They house huge 20-inch alloy wheels and powerful brakes, while the rear arches are vented for improved aerodynamics. 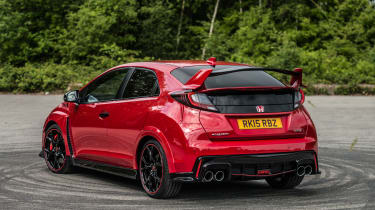 The car is arguably the most eye-catching from the rear, where you can see four exhaust pipes and a huge carbon-fibre spoiler. The Type R is available with a limited selection of colours, including the company’s signature performance colour, Championship White.

Looking at the car's rivals, it's easy to see why Honda took its time with the launch of the new Type R. It faces extremely tough competition in the form of the SEAT Leon Cupra 280 and the new Renaultsport Megane Trophy, which just beat the SEAT’s lap time round Germany’s gruelling Nurburgring racetrack. The Honda aims to be even faster.

Away from Nurburgring lap-time battles, the Honda is also competing with accomplished hot hatchbacks such as the Ford Focus ST, Vauxhall Astra VXR and Volkswagen Golf R. You can see (and hear) the new Honda Civic Type R in the video below:

The old Honda Civic Type R engine had to be worked hard to extract the best performance, but the new turbocharged engine changes all that. It offers low-down power for strong acceleration without the need to constantly change gear. The engine produces 306bhp, which is enough to get it from 0-62mph in 5.7 seconds and on to a top speed of 167mph. However, Honda says its hi-tech mechanicals mean fuel economy of around 40mpg is possible.

For more information on the current Honda range, visit the Carbuyer Honda reviews page. Check out Carbuyer's review of the Type R here. 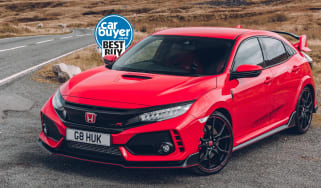