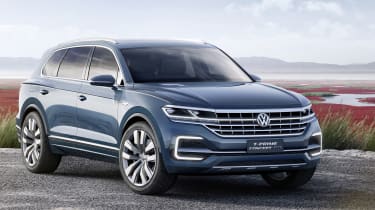 The next-generation Volkswagen Touareg SUV has been caught on camera prior to going on sale later this year.

Despite its disguise, a pronounced resemblance to the Volkswagen T-Prime concept can be seen, its unmasked flanks revealing a heavily contoured side treatment. Although the front of the car is partially obscured, its front grille appears to flow into the headlamps in the manner of the T-Prime. The rear of the car is also hidden beneath a zebra-pattern mask, but the glow from the rear lights is similar to that seen on the concept.

A switch to Volkswagen Group’s MLB platform, as used by the Audi Q7, lays the foundations for a Touareg GTE plug-in hybrid model and should also mean greater interior room, although a seven-seat model has been ruled out.

The next Touareg will hit showrooms during 2017, rivalling the Volvo XC90, Mercedes GLE and BMW X5.

The T-Prime concept was revealed at the 2016 Beijing Motor Show, where Frank Thomas, full-size vehicle sales and marketing boss for VW, spoke to our sister title Auto Express. He confirmed that the production car would have a marked resemblance to the concept, but that the proportions would be altered slightly. 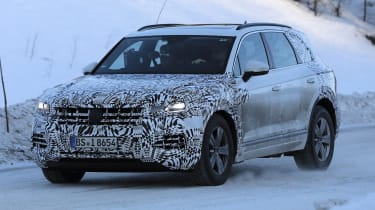 “The wheelbase of the show car is an Audi Q7’s, so we’ll take a few millimetres out of the rear door length for the production car. If anything, we think the slightly shorter body makes the crease along the sides and the falling roofline look even more dramatic,” he said.

The front of the concept has a very distinctive chrome grille, incorporating LED running lights that span almost the entire width of the car, interrupted only by the central VW badge. The tail-lights resemble the signal-strength symbol on a mobile phone screen, or perhaps an electric car’s battery charge meter.

Overall, the T-Prime has a far more dynamic, sporting character than the present Touareg, where subtle blisters over the rear wheelarches add a muscular look. The roofline is lower and more car-like than the current Touareg’s, too – without compromising interior room.

Thomas added: “You sit slightly lower than before and that makes all the difference with the headroom,” although he did rule out the introduction of a seven-seat variant.

Even though the next Volkswagen Touareg will be based on a different chassis to the current car, Thomas told Auto Express that VW would resist the temptation to fit a small four-cylinder engine in its flagship SUV, even though rivals like the Mercedes GLE offer this option. He explained: “Our experience is that customers want the extra relaxed performance of six cylinders. We’ll start with a V6 diesel, although we’ll also offer a V8 TDI at the top of the range.” 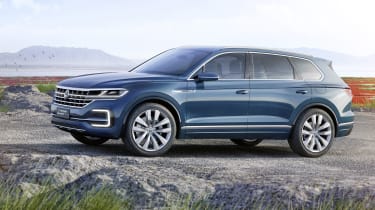 Certain markets will have the option of a 2.0-litre TFSI petrol engine, which will also be employed in a Touareg GTE plug-in hybrid, in combination with an electric motor. This will be able to replenish its battery with power from the engine to maximise range. “We’re thinking the pure-EV range of the Touareg GTE has to be at least 50km (30 miles),” Thomas said.

The T-Prime concept offered a glimpse of the on-board technology VW will include in the next Touareg, which is now the brand’s flagship following the discontinuation of the Volkswagen Phaeton limousine. With the expectations of luxury-car buyers in mind, the new Touareg will be the first VW to get a new generation of infotainment system.

This uses a 15-inch touchscreen that dominates the dashboard and is angled slightly towards the driver, enabling physical buttons to be all-but eliminated. It’s slightly curved, to reduce reflections and glare. The concept uses an interactive ‘desktop’ reminiscent of Microsoft’s Windows Mobile operating system.

Facilities, features and applications will be represented by ‘tiles’ on the screen – the size of the tiles and their layout can be set – with each user’s settings stored under their individual ‘log-in’. Tiles can also be swiped from the central screen to appear on the instrument panel. However, Volkswagen is still evaluating whether customers will accept this level of smartphone-style interaction – the inclusion of a physical ‘home’ button to enable a return to a ‘safe’ starting point follows smartphone convention. 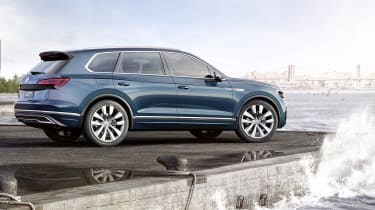 Volkswagen has made no solid announcement on pricing, but acknowledges the Touareg’s role as its global flagship. We expect the new model to compete with top-spec versions of the Volvo XC60 and Audi Q5, as well as the Volvo XC90, Audi Q7, BMW X5 and Mercedes GLE.

The new Touareg will be built at VW’s plant in Bratislava, Slovakia, alongside the Audi Q7 and Porsche Cayenne. An undisguised production car is expected to be revealed this spring, with UK sales commencing in summer or early autumn.