The new Ford Mondeo is expected to hold more of its value than many of its upmarket rivals, according to used car pricing experts, CAP Automotive.

It said the new Mondeo will retain more of its value on the used market than the BMW 3 Series, Audi A4 and Volkswagen Passat.

The experts, who publish used car pricing guides for car dealers, also say the new Mondeo will be worth around £1,750 more after three years than the old model was at three years old.

According to CAP’s Gold Book, a diesel Mondeo 2.0 TDCi ECOnetic Zetec will hold onto 42.7% of its new list price after three years and 30,000 miles.

Impressively, the Mondeo is still ahead when the mileage is increased to 60,000 and petrol-powered models are worth more than its rivals, too.

This news is unexpected, as the Ford Mondeo has traditionally been seen as an 'everyman' car, spawning the phrase Mondeo Man. More upmarket models such as the BMW 3 Series and Audi A4 have traditionally been more desirable and worth more second-hand as a result.

Ford has said it won't offer big discounts in an attempt at keeping used values strong. But that means buyers will struggle to get a bargain price on a new Mondeo.

Dylan Setterfield, who heads the price forecasting team at CAP, said: "The new Mondeo is anything but ordinary and its sheer good looks are a big contributor to such strong expected value retention as a used car in three years.

"It's a winner inside, too, with premium fit and finish, but the engineering underpinning the whole package is also excellent. The old Mondeo was a fine drive and hard to improve on, but the new version offers an even more comfortable experience.

"Ford's EcoBoost and ECOnetic engines are even better in their new versions. Imagine being told five years ago that in 2014 a 1.5-litre petrol engine in a large family car would give you 160bhp of poke and 50mpg, but that's today's reality."

But he issued a word of caution, saying that the Mondeo’s impressive used values could be overtaken by the new Volkswagen Passat or revised versions of the Audi A4 and BMW 3 Series in the coming months. 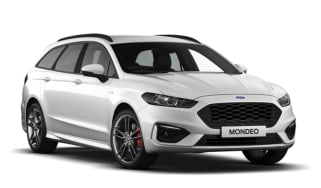