Land Rover has finally announced it will build the long-awaited Range Rover Evoque convertible. The news follows several years of speculation and rumours, as well as some convincing concept cars. The new car will go on sale in 2016.

As with previous mock-ups, the new Evoque convertible will have a folding fabric roof and will be built alongside the five-door and coupe versions of the model at the firm's factory in Halewood, Merseyside.

The car is also likely to be available as a fuel-saving front-wheel-drive model. A four-wheel-drive version, which will feature the same grip-enhancing technology as the standard Evoque, is also expected to be offered.

Land Rover will inevitably need to strengthen the Evoque's chassis to make up for the loss of rigidity in the roof, and the roof mechanism could eat into available boot space when folded down.

Since its launch in 2011, the Range Rover Evoque has become the car maker's best-selling model. The Evoque accounts for one in three Land Rovers produced, and one is built every 80 seconds.

A facelifted version of the Evoque will be shown to the public at the Geneva Motor Show on Tuesday. The new car features slightly revised styling inside and out, with new seat fabrics, improved interior materials and a new, wider range of personalisation options.

Those options include a raft of new paint colours, new contrasting roof colours and a new range of alloy wheel designs. Land Rover's design boss Gerry McGovern said while some car makers offer enormous scope for customisation, the Evoque will allow buyers to customise their cars in a way that "protects design integrity".

The 2016 Evoque will be powered by Land Rover's new 'Ingenium' engines. The all-new engines, built at the firm's new £500m Wolverhampton engine factory, promise CO2 emissions as low as 109g/km and fuel economy of up to 68mpg.

McGovern also confirmed an all-new version of the Evoque is under development. The next-generation Evoque is likely to build on the current car's trend for greater efficiency through improved engines and reduced weight. But he also suggested the design of the new car would be an evolution rather than revolution.

He said the design of "luxury product refines and evolves" and he doesn't want the new car to change for the sake of change. He pointed to the continued design evolution of the Porsche 911, Volkswagen Golf and Apple iPhone. 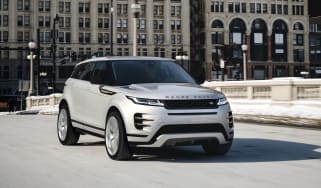