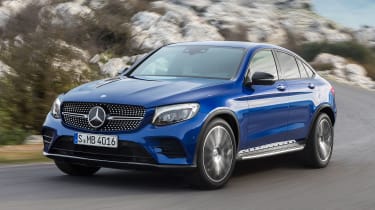 Full details of the new Mercedes GLC Coupe SUV crossover have been announced, including full UK prices and specifications.

When the new car arrives later this year (orders open in June and deliveries start in October) it’ll take on rivals like the BMW X4 and sit below the Mercedes GLE Coupe – a rival for the BMW X6 – in the Mercedes range.

Power will come from the same range of 2.1-litre diesels used in the Mercedes GLC SUV and Mercedes C-Class saloon, although a turbocharged 2.0-litre petrol will also be available. You can also go for a 255bhp 3.0-litre V6 diesel or a high-performance AMG GLC 43 Coupe with a twin-turbocharged 3.0-litre petrol V6. A super-efficient plug-in hybrid is likely to arrive later.

In terms of design, these coupe/SUV crossovers always cause a stir. The BMW X6 – the first of this type of car to be released – divided opinion with its looks, but has proved popular nonetheless. It’s longer and lower than the more upright GLC SUV, emphasising the coupe element of its design. 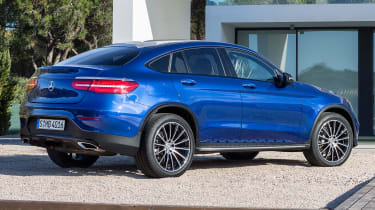 Unsurprisingly, the swooping, curvaceous roofline we saw on the Shanghai concept is present and correct, as is the large front grille with a huge three-pointed star at its centre, suspended by a single bar running across its full width. Also carried over from the concept are an intricate light signature – which can be specced as LEDs as an extra, jutting wheel arches and heavily creased side panels.

There are a couple of features which haven’t made the transition, however, with the most obvious difference being the abandonment of the four vertically stacked tail pipes in favour of a pair of more traditionally positioned exhausts. Also, the front bumper doesn’t have quite such large air intakes as the concept seen at Shanghai. 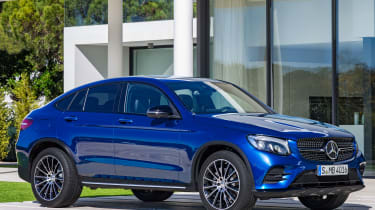 At the back, the tail-lights have taken on the wide, slender appearance that’s becoming a theme on Mercedes’ coupes, while the shallow slope of the rear deck emphasises the car’s coupe shape, as does the acute angle of the window line where it meets the shoulder line at the back.

At launch, there will be just the two trim levels to choose from – Sport and AMG Line – with 18-inch alloys, sat-nav, synthetic leather upholstery and a reversing camera all standard. You also get LED headlights, heated front seats, sports suspension and an electric tailgate, as well as black ash interior trim and a black ‘diamond’ grille.

Step up to AMG Line – a £1,495 premium over Sport – and you get additional equipment like a flat-bottomed AMG steering wheel, brushed steel sports pedal and synthetic leather upholstery in either black or Cranberry Red. Go for AMG Line and you also get 19-inch alloys, a sporty AMG body kit and a chrome-accented grille.

Options include the £1,495 Premium package that adds ambient interior lighting, a sliding glass sunroof, keyless go and electric seats with memory. Add the £2,795 Premium Plus package, however and you get all the above as well as a 13-speaker Burmester stereo and the COMAND Online infotainment system.

These first images of the GLC Coupe’s interior show that it’s been carried over almost unchanged from the standard GLC SUV. This means the centre console is dominated by three circular air vents, with a tablet-like infotainment screen sitting on top of the dashboard. This will be controlled by a touch pad and rotary wheel on the centre console. 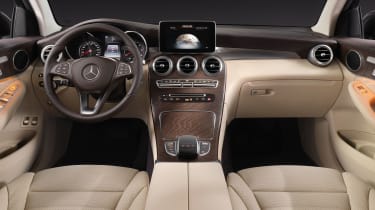 The instrument binnacle – two dials, the speedometer and rev counter with a small central screen between them – will be carried over in its entirety as well.

One thing that’s almost certain to be different from the standard GLC is the amount of space in the back seats. The coupe is slightly longer than the SUV, so legroom probably won’t differ significantly, but that swooping roofline will likely mean a reduction in rear-seat headroom. 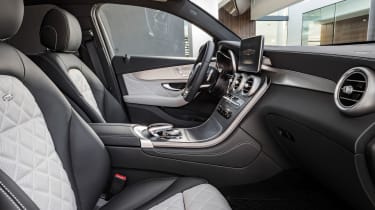 Life might be more of a squeeze for anyone sitting in the middle back seat, too. Boot space is also likely to be compromised a touch compared to the standard GLC SUV. Being slightly longer than the BMW X4, however, the GLC Coupe should be slightly roomier than its main rival.

All GLC Coupes will come with Mercedes’ sports suspension system as standard. This adaptive system offers a variety of selectable modes to alter the behaviour of the car, depending on the circumstances. You’ll be able to choose from ECO, COMFORT, SPORT, SPORT+ and INDIVIDUAL, which set the car up for optimum efficiency, comfort or sportiness (or a customised balance of all three) by tweaking the car’s suspension, steering and engine. 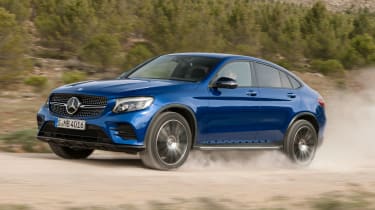 Mercedes claims the GLC Coupe will be the only car in its class available with the option of air suspension, while it also gets quicker, sportier steering than the standard GLC SUV.

Like the SUV, the GLC Coupe will initially come with a couple of 2.1-litre four-cylinder diesel engines, producing either 167 or 201bhp and a 255bhp 3.0-litre V6 diesel. The four-cylinders are both capable of returning around 55mpg and emit from 134g/km of CO2. This means an annual road-tax bill of £130 (if registered before April 2017) and a Benefit-in-Kind (BiK) company-car tax liability of 23%. 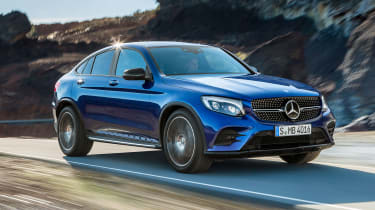 Arriving at a later date than the diesels, the entry point to the range will be a turbocharged 2.0-litre petrol, producing 208bhp. Capable of doing 0-62mph in 7.3 seconds, it’ll be capable of returning approximately 40mpg. Buyers of this model will be liable for a £180 tax bill.

A super-efficient plug-in hybrid – the GLC 350e – will arrive at a later date, with preliminary figures suggesting it’ll be capable of a combined 316bhp and a 0-62mph time of 5.9 seconds. Despite this impressive performance, it’ll be able to go for around 18 miles on electric power alone and will emit just 59g/km of CO2, making it exempt from road tax and the London Congestion Charge and only liable for an 11% BiK contribution. 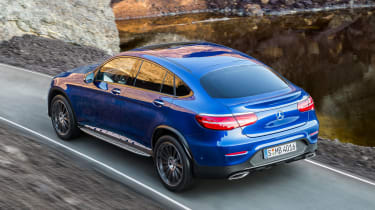 Naturally, a high-performance AMG version is also on the cards and this will feature the same twin-turbocharged 3.0-litre petrol V6 that we’ve recently seen in the new Mercedes E-Class. It’ll produce 362bhp and Mercedes says this version to do 0-62mph in 4.9 seconds.

All versions of the GLC Coupe will be four-wheel drive and come with Mercedes’ latest nine-speed automatic gearbox.

Orders for the new Mercedes GLC Coupe are open now, with first deliveries beginning in the UK in October.