Mercedes reveals new, smaller SUV, based on the C-Class saloon 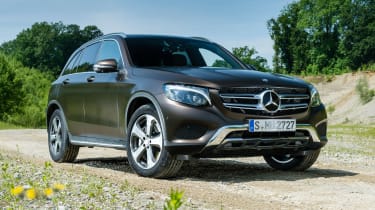 This is the Mercedes GLC, an SUV that'll compete with the BMW X3 and Audi Q5 when it's launched in November this year.

The GLC is based on the new Mercedes C-Class, but offers buyers more interior space plus class-leading off-road ability, according to its maker. To that end, the GLC comes with raised suspension and the option of underbody protection.

Despite the GLC's SUV credentials, it still sports the sleek profile and design touches of the standard C-Class, and is actually relatively compact, being lower, wider and shorter than a BMW X3. We were given an idea of the car's design when the GLC Coupe concept car was displayed at the Shanghai Motor Show in April, but this is the first time we've seen the production GLC in full.

Customers will be able to choose between the standard bodywork or an off-road styling pack that offers better approach and departure angles, as well as underbody protection and a sporty AMG pack that includes more aggressive bodywork and larger alloy wheels.

The C-Class theme continues inside with a centrally mounted infotainment tablet that's controlled via a touchpad and rotary wheel in the central console. As you'd expect from a Mercedes, plenty of luxurious finishes will be available, including Napa leather and open-pore wood trim, while a panoramic sunroof is an optional extra that makes the interior seem airier and even more spacious.

In practicality terms, the GLC appears to be well equipped to compete with its rivals. Boot space stands at 550 litres with the rear seats in place, which is the same as the BMW X3 and 10 litres more than the Audi Q5. Folding the 40:20:40 split rear seats down via a button in the boot opens up 1,600 litres of space. You can also adjust the angle of the back of the rear seats to add an extra 30 litres if necessary, while optional air-suspension allows you to lower the boot lip by 40mm if you have particularly awkward items to load.

That optional air-suspension comes with a five-stage Dynamic Select system, allowing you to alter the suspension depending on the situation you're in – and if you order the optional off-road pack, it lets you raise the body of the car by 50mm for better ground clearance.

Two diesel engines and one petrol will be available from launch. The 168bhp 220d will be the entry-level model, capable of 56mpg and CO2 emissions of 129 grams per kilometre for road tax of £110 a year.

The more expensive 201bhp 250d will be faster, but return identical economy figures to the 220d. The 250 petrol will have 208bhp and will be the fastest model in the range, with a 0-62mph time of 7.3 seconds. All models comes with Mercedes' 4MATIC four-wheel-drive system and a nine-speed automatic gearbox.

Other models will be added to the range later, with a GLC 350e plug-in hybrid penciled in for around a month after the UK launch in November. That model will have a 208bhp petrol model paired with a 115bhp electric motor, enabling the car to get from 0-62mph in 5.9 seconds while emitting only 60g/km of CO2. A rear-wheel-drive model will follow next year as a cheaper alternative to the 4MATIC versions.

Mercedes has yet to announce official prices, but we'll bring them to you as soon as they’re announced in the lead-up to the car's UK launch.