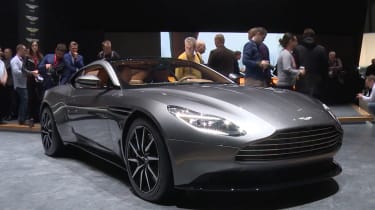 The long-awaited replacement for the Aston Martin DB9 has finally been revealed in full. The Aston Martin DB11 is the British brand’s first all-new car for many years and is said to be “the most powerful, most efficient and most dynamically gifted DB model” in the company’s history. It's making its dynamic debut in front of the general public at this weekend's Goodwood Festival of Speed

Although the DB11 is still clearly an Aston Martin, with its signature grille and elegant proportions, it’s slightly more angular than the car it replaces and shares certain design themes with the Aston Martin DB10 concept car that starred in the latest James Bond film, Spectre.

The DB11 is powered by a new 5.2-litre twin-turbo V12 engine – the first turbocharged engine from the company. It means that, with the exception of the super-exclusive One-77 and Vulcan supercars, the DB11 is the most powerful Aston ever made. 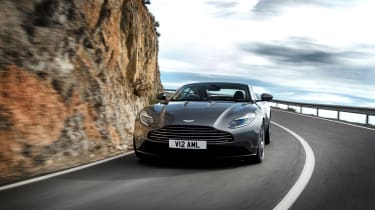 Due to go on sale at the end of this year, the car will replace the long-serving DB9 and also marks a new era for the British manufacturer, which is planning to release several new models in the coming years.

These include a convertible ‘Volante’ version of the DB11 in 2017, an updated Aston Martin Vantage the following year, the four-wheel drive Aston Martin DBX electric crossover, a new saloon car to replace the Aston Martin Rapide and finally a new model of the flagship Aston Martin Vanquish around 2020.

There’s no doubt that the new DB11 has a stronger, edgier design than the DB9 – pretty as is it is – could ever hope to have.

True to its word, the British manufacturer has altered its design template for the latest model, with CEO Andy Palmer telling our sister title Auto Express last year: “We have the issue with some people saying the cars all look alike – that’s solved in the next generation of cars”.

It’s still very much recognisable as an Aston Martin, however. The signature grille – although altered to be larger and more imposing – remains, while the creases on the bonnet are even more prominent than on the DB9. Prominent front wings and a wide stance also give the DB11 a stronger, more muscular look than the DB9. 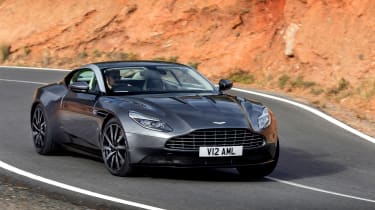 You’ll also notice the more steeply raked windscreen, the contrasting colour of the roof support and the slender all-LED headlights. At the back, prominent haunches engulf the wheelarch. There’s also a strong ‘character line’ running from the headlight clusters to the new rear light clusters, which curve around the subtle rear spoiler.

Like its exalted siblings – the One-77 and Vanquish supercars – the DB11 has heavily pinched-in bodywork around the sides, which widens again around the rear wheels, giving a curvier look.

Unveiled in an enticing video earlier this year, an all-new 5.2-litre twin-turbo V12 engine will power the DB11. It’s the most powerful series production V12 engine the brand has ever produced, excluding those in the track-only Vulcan and limited-edition One-77 hypercars.

Aston Martin has confirmed that the engine produces 600bhp and gives the car a 0-62mph time of 3.9 seconds and a top speed of 200mph.

There’s also the possibility of a V8 version of the DB11 should Aston Martin take advantage of its relationship with Mercedes-AMG. The German company has agreed to provide V8 engines for Astons, having bought a 5% stake in the British manufacturer.

The DB11 will offer a choice of driving modes (GT, Sport and Sport Plus) which make the engine and eight-speed automatic gearbox respond progressively more intensely.

Inside, the DB11 will boast a 12-inch LCD display screen behind the steering wheel, where you’d normally find an instrument cluster. This will display ‘primary vehicle information’ such as speed, revs and sat-nav directions with “absolute clarity”. 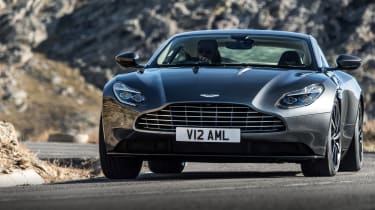 A second centrally mounted eight-inch screen is dedicated to infotainment. It’s controlled by a rotary dial, as well as a touchpad offering character, touch and gesture recognition. There’s also a parking-assistance system and a 360-degree camera to help with tricky manoeuvring.

Aston is promising a decent degree of practicality for the DB11 – in keeping with its status as a ‘Grand Tourer’ rather than a hardcore sports car. It’ll have more head and legroom than the DB9, rear ISOFIX child-seat points and a usefully sized boot. 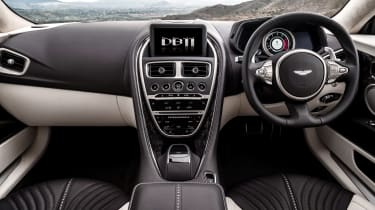 “DB10 was a concept car that was already agreed for the [James Bond Spectre] film. But calling it 10 meant we were always going to skip a generation [for DB9] and call the next one 11. So we decided to call [the Bond car] 10 – up to that point it was DB8, I think.”