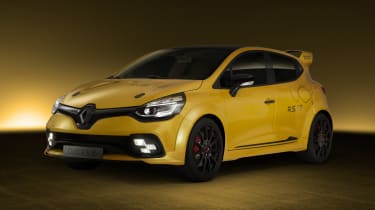 Renault has revealed a hardcore concept version of its Clio Renaultsport hot hatchback at the Monaco Grand Prix.

Called the R.S.16, it’s been developed to celebrate the 40th birthday of the Renault’s motorsport division – Renaultsport, which is also responsible for its fastest models. This year is also the 25th anniversary of the introduction of the Renault Clio, the popular superminis which replaced the Renault 5. 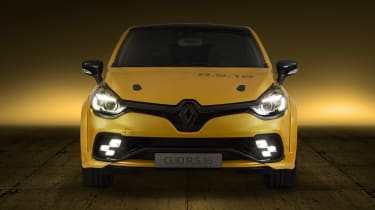 While Renault hasn’t confirmed or denied that the R.S.16 will go into production, we’d be very surprised if it wasn’t made in limited numbers.

Compared to the standard Renault Clio Renaultsport, lots of changes have been made. It uses the same 271bhp turbocharged four-cylinder petrol engine found in the Renaultsport Megane RS Trophy R, which should make for some seriously rapid acceleration.

As well as the engine, the Clio concept has also nicked the suspension, brakes, wheels and six-speed manual gearbox from the hot Megane. This replaces the oft-criticised six-speed dual-clutch automatic gearbox found in the standard Clio Renaultsport. The concept car also benefits from a lightweight exhaust system, which not only improves the engine’s performance, but also provides a more distinctive noise. 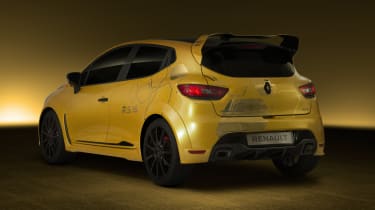 As well as the changes made under the skin, the Renualtsport Clio R.S.16 is fitted with a striking bodykit, including flared wheel arches, a jutting front splitter, twin exhausts and a huge rear wing that comes straight off the Clio Cup racing car. There are also 19-inch wheels, and daytime running lights in the shape of a chequered flag.

No-one outside of Renault has driven the car as yet, but our sister title, Auto Express has had a passenger ride in the car, which you can read here.

Renaultsport boss Patrice Ratti said: “The idea was to celebrate our fortieth year, as well as our return to F1. A Clio RS fitted with our most powerful engine was an attractive proposition, and one that was technically possible. 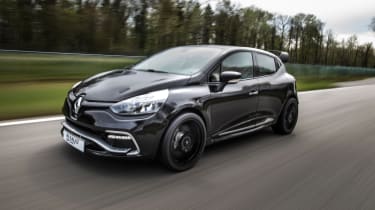 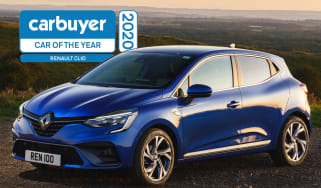