MINI’s fastest Clubman is now on sale; we’ve got all the prices and specs you need 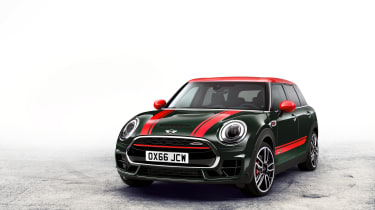 The MINI Clubman John Cooper Works is now on sale, priced from £29,345.

The model brings a host of exciting features to the Clubman and joins the MINI Countryman and MINI Paceman JCW models in using MINI’s ALL4 four-wheel-drive system.

With 228bhp from its turbocharged petrol engine, the JCW is the fastest of Clubman models. It is also fitted with a range of suspension and brake upgrades to deal with the extra power, as well as the choice of a six-speed manual or eight-speed automatic gearbox. The Clubman JCW also gets special, sporty styling additions and extra equipment inside – it’s the first MINI to get a touch-sensitive infotainment system.

The MINI Clubman JCW starts at £29,345 for the six-speed manual version, with the automatic priced a little higher. This will set you back at least £30,945, although tempting optional extras may push that price up.

We've driven the MINI Clubman – you can read our review here.

The new MINI Clubman JCW gets a variety of styling upgrades that set it apart from the Cooper S model it’s based on. A new front bumper with air intakes feeds cooling air to its powerful engine and brakes distinguishes it. It’s also shaped in a way that improves the car’s aerodynamics. It’s matched to newly styled side sills, a special roof spoiler and twin exhausts set within a new design of rear bumper. 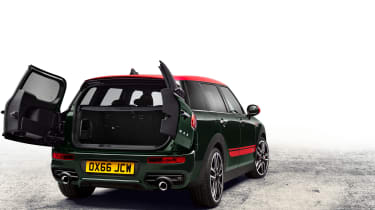 A distinctive new red-highlighted front grille embellished with a ‘John Cooper Works’ logo provides the JCW with its own identity, with JCW emblems appearing prominently in various other locations on the car, too. Additional details include new surrounds for the indicator repeaters on the front wings, while LED headlights and 18-inch black alloy wheels are fitted as standard. You can also have these in silver, or upgrade to 19-inch wheels. Finally, buyers will be able to specify a special Rebel Green paint finish that’s exclusive to the JCW edition.

The sporting character of the Clubman John Cooper Works continues on the inside. You sit on sports seats, which are trimmed in black fabric as standard, while black leather with red accenting is optional. The sense of occasion is boosted by a leather steering wheel, stainless-steel pedals and red accenting on the steering wheel, gear selector and instrument surround.

Apart from these differences, the interior is much the same as that of any other MINI Clubman. The large central display houses MINI’s version of BMW’s iDrive infotainment system, which for the first time, includes touchscreen functionality as an option. 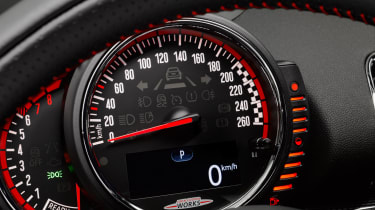 Boot space and practicality is unchanged compared to the standard Clubman. The side-hinged boot doors remain and give access to a 360-litre load space. Drop the rear seats down and that increases to a maximum of 1,250 litres.

All Clubman JCWs come with air-conditioning, rear parking sensors, cruise control, Bluetooth connectivity, a USB port and satellite navigation. You also get hands-free boot access, which means you can open the boot by waving your foot under the rear bumper, while a 6.5-inch colour infotainment screen is also standard. 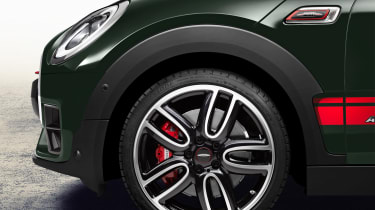 Being a MINI, there’s also a seemingly never-ending list of optional extras to choose from. These include an upgraded Harmon Kardon stereo, upgraded sat nav and an 8.8-inch touchscreen infotainment system. Buyers can also add the likes of dual-zone climate control, heated front seats and a heated windscreen, while internet connectivity is available as an option as well.

Most people are expected to tick the £2,000 Chili Pack option box, which includes the choice of any upholstery from the range, heated seats, 19-inch wheels and improved interior storage. There are also a multitude of other personalisation features and optional extras to choose from.

There’s only one engine to choose from – a turbocharged 2.0-litre four-cylinder petrol with 228bhp. This is enough to propel the car from 0-62mph in 6.3 seconds and on to a top speed of 148mph. Despite the fact that both the Clubman and the considerably lighter JCW hatchback have the same amount of power, they both have the same 0-62mph time.

This is thanks largely to the extra grip from the Clubman’s standard four-wheel-drive system, as well as the fact that the Clubman’s power is more evenly spread over the rev-range.

The Clubman JCW also uses a less restrictive and noisier exhaust for improved performance and a sportier feel. 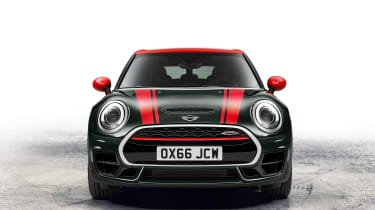 In terms of economy and emissions, the Clubman JCW will return 38.2mpg with the manual gearbox, rising to 41.5mpg if you go for the eight-speed automatic. These figures equate to CO2 emissions of 168 and 154g/km respectively and (if bought before April 2017) a road-tax bill of £185 for automatic cars or £210 if you go for the manual.

Meanwhile, the adaptive four-wheel-drive system can apportion the correct amount of power to the correct wheel, depending on the driving mode, road conditions and how hard the car is being driven, in order to maximise grip.

There are three driving modes to choose from – ‘Green’ and ‘Mid’ soften the suspension, throttle response and steering, while ‘Sport’ puts everything into maximum-attack mode for fast driving. 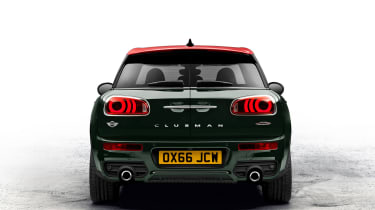 As well as electronics, MINI has also included more powerful brakes and a sportier suspension setup to help control the extra power and performance.

The six-speed manual gearbox features a gearlever not available elsewhere in the Clubman range, and is designed to allow fast gearchanges. The eight-speed ‘Steptronic’ automatic gearbox features a ‘launch control’ system for the fastest possible starts, and when the MINI Navigation XL system is fitted, the gearbox can anticipate upcoming bends and choose gears appropriately.

The MINI Clubman JCW is on sale now, priced at £29,345 with a manual gearbox, while cars with the eight-speed automatic cost from £30,945.