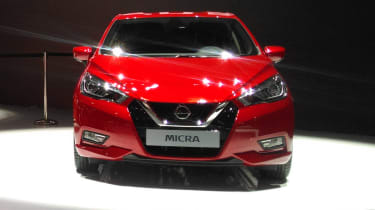 Pricing for the all-new Nissan Micra has been released, with an entry-level model costing £11,995 when the car goes on sale in March this year.

Arguably the most exciting version of the car ever, the latest Micra has been priced aggressively to help it compete with its rivals, which include the Ford Fiesta and Volkswagen Polo.

Nissan has been determined to reinvent the Micra, a car that used to be considered one of the dominant forces in the supermini class. In the last decade or so it has been outclassed by the competition, the current model was let down by an unimaginative interior and forgettable driving dynamics. The latest Micra looks set to right those wrongs thanks to new engines for much-improved performance and economy, as well as a higher quality interior and improved technology.

Due on sale during 2017, the Mk5 Nissan Micra has the task of attracting customers away from the Volkswagen Polo, Ford Fiesta, SEAT Ibiza, Skoda Fabia, Hyundai i20, Vauxhall Corsa, Toyota Yaris, Honda Jazz and the upcoming Kia Rio.

The new Nissan Micra is on sale now – you can read our review here.

The next-generation Micra takes inspiration not from the previous model, but instead from the Nissan Sway concept shown at the Geneva Motor Show in March. It also incorporates hints of other models in the current line-up, like the Nissan Qashqai SUV. The nose is dominated by a large front grille, intersected by chrome trim that frames a large Nissan badge. Like several rivals, the headlights then sweep back almost as far as the bonnet, while deep lower grilles are flanked by angular foglights.

Part of the new Micra’s far sportier looks come from a crease that flows from the grille, spills over the front wings and continues into the front doors, where it dips down and continues back to the tail-lights, accentuating car’s prominent rear shoulders. As is the current trend, the central and rear roof pillars are blacked-out to make the roof look as if it’s ‘floating’, while the Micra tries to disguise its five-door configuration with hidden rear door handles. 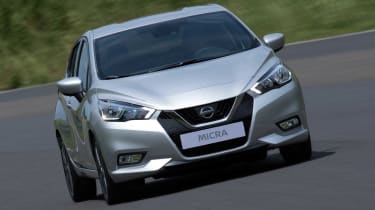 At the rear, the light clusters are pushed to the extremities of the bodywork to accentuate its width, while a roof spoiler and angular lines hint at the car’s sporting pretensions. It’s not just a trick of the eye in this case: the new Micra is the widest and longest version of this car ever, with more interior room than before despite its less curvy roof.

Not only does the new Micra have more space, but its interior quality is also said to be far better than before. The centrepiece is what Nissan calls a ‘Gliding Wing’ dashboard, which supposedly lends the interior a “light, sleek and spacious impression”. Nissan has used colour to liven the cabin up, too, with images showing body-matching shades splashed on the dashboard, centre console and seats.

A large seven-inch display takes pride of place on the dashboard and controls everything from your music to navigation, as well as apps from Nissan and Apple CarPlay if you have a compatible smartphone. 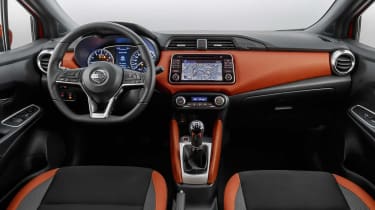 A premium Bose stereo will be available, with six speakers, including some mounted in the headrest, to optimise sound for the driver, including hands-free calls. Between the analogue gauges in the instrument cluster, you’ll also find a digital display for fuel economy, trip data, navigation and media information.

Nissan says the Micra’s steering wheel adjusts for reach and rake, while it should have a lower driving position than the previous model, with a wider range of seating adjustment to suit drivers of all shapes and sizes.

Autonomous emergency braking will be an important part of the Micra’s safety kit, along with blind-spot detection and a system to alert the driver if they’re tired. You can also expect Nissan’s ‘Around View Monitor’ (designed to detect moving cars, people and obstacles as you reverse out of parking spaces), traffic-sign recognition and auto-dipping headlights.

Interestingly, the new Micra shares its platform with the next Nissan Juke, so it should also share its engines. From launch, you’ll be able to choose a turbocharged 1.0-litre petrol engine with three cylinders and a 1.5-litre diesel, both generating an identical 89bhp. An entry-level version of the 1.0-litre petrol will come later, with 75bhp. 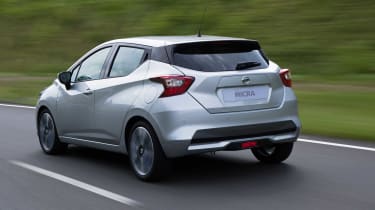 Our sister title Auto Express has also reported that a ‘warm’ Nissan Micra will get a 0.9-litre turbocharged petrol engine with around 120bhp to satisfy keen drivers. Following the success of Nismo hot-hatchback versions of the Juke, it would be wise not to rule out a Micra Nismo, but there’s no official confirmation yet. If good fuel economy and cheap road tax are your priorities, a hybrid model with a petrol engine and electric motor is also thought to be under development.

The new Nissan Micra made its public debut at the 2016 Paris Motor Show and will be on sale across Europe in March this year. The UK range will start at £11,995 for the entry-level Visia model. An upgraded Visia+ model will be available, too.The mid-range Acenta will be priced at £14,995 with a T-GI 90 petrol engine, while the range-topping Tekna will start at £17,295.