Honda’s record-breaking Civic Type R is set to hit showrooms in July, with prices starting from £30,995. 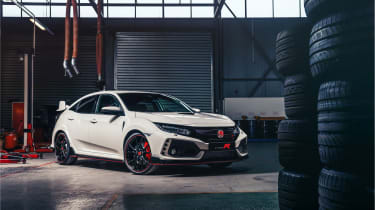 The new Honda Civic Type R will make its UK debut at the Goodwood Festival of Speed in the coming weeks.

It will feature on Honda’s stand, and will be driven up Goodwood’s iconic hillclimb by British Touring Car Championship drivers Matt Neal and Gordon Shedden.

Goodwood will mark the latest on-track outing for the new Civic Type R. The hot hatchback recently set a world record for the fastest ever lap time of the legendary Nurburgring circuit in Germany by a front-wheel-drive car.

With 317bhp at its disposal, it lapped the track in seven minutes and 43.8 seconds, beating the previous model by around seven seconds and taking the crown from the Volkswagen Golf GTI Clubsport S.

The Type R competes directly with the Ford Focus RS and SEAT Leon Cupra, with a £30,995 entry-level model and a more lavishly equipped GT model for £32,995. The latter adds dual-zone climate control, a Honda CONNECT infotainment system with Garmin sat nav, a more powerful stereo and a wireless mobile phone charger. The GT is distinguished from the entry-level model by its LED front foglights.

Depending on the size of the deposit, the new Honda Civic Type R is available from £299 a month on a PCP finance deal.

The rapid development in front-wheel-drive handling prowess really comes to light when you look at the history of the Nurburgring lap time. Not so long ago, an eight-minute time was seen as the mark of a truly talented car and it took a very exotic machine to cover the German circuit’s 12.9 miles any faster than that.

Today, though, the lap time of the £31,000 Honda Civic Type R eclipses those set by supercars of the recent past, such as the Pagani Zonda C12 S, Lamborghini Gallardo and Ferrari F430 of 2002, 2003 and 2005 respectively. Most impressive is that the late-development Civic that set the record is claimed to be “technically representative” of the car that’ll appear in showrooms and was shod with road-legal tyres rather than super-sticky racing slicks that have sometimes been used for these efforts.

The Type R’s lead chassis engineer, Ryuichi Kijima, puts its stonking performance down to a wider and longer wheelbase (the distance between the wheels) as well as a new suspension system and wider tyres. The 2017 Civic Type R is also 16kg lighter than the car it replaces.

The new Honda Civic Type R will be built in the firm’s Swindon factory alongside the standard Civic and will be shipped around the world to markets in Europe, North America and Japan.

We already had a good idea what the 2017 Honda Civic Type R would look like, as it was previewed in concept form at the Paris Motor Show last year. The production car has hardly changed from this prototype. 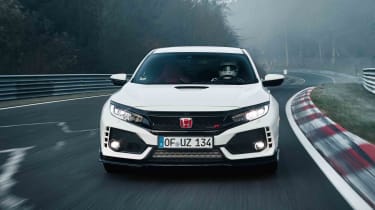 The new Civic Type R features three striking exhaust pipes, arranged centrally below its rear diffuser. Like the concept, it has large air intakes and an aerodynamic splitter at the front, side skirts on the flanks and a huge rear wing. As with previous Type R models, it’ll make extensive use of red badges and trim inside and out.

Honda promises the new Type R’s flat underbody and aerodynamic modifications make it smoother than the outgoing car, while a ‘vortex generator’ at the back of the roof will despatch air with maximum efficiency. The company says the new Civic Type R has a best-in-class balance between lift and drag, meaning it should stick to the road tenaciously and simultaneously move through the air as smoothly as possible – all in the name of performance, grip and handling.

The concept was fitted with 20-inch wheels finished in gloss-black and we expect these to be carried over to the production car. Likewise, powerful Brembo brakes are likely to be fitted.

The new Type R is fitted with a revised version of the 2.0-litre turbocharged petrol engine from the outgoing car, but Honda has upped power by 10bhp, so the new Type R produces 317bhp. That’s likely to result in a 0-62mph time of around five seconds and while it’s not clear if the outgoing Type R’s top speed will increase, if the new model can reach the same 168mph as the old car, it’ll still be one of the fastest hot hatchbacks around.

The Civic Type R will retain Honda’s iconic VTEC system that, along with its turbocharger, gives a boost of power at high engine speeds, and has become something of a Type R hallmark. 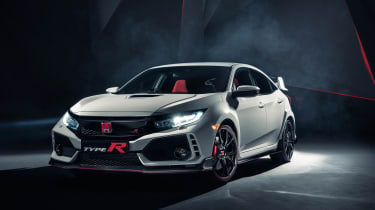 Like the engine, the new Type R’s six-speed manual gearbox has been carried over from the old car, but modified slightly. It now features a rev-matching system that blips the throttle when changing gear. This a) makes for smoother gearchanges b) helps the engine produce as much power as quickly as possible when a new gear is selected and c) sounds brilliant.

Rev-matching systems used to be the preserve of high-end sports cars like the Porsche 911, and Honda’s decision to fit one to the new Civic Type R will be welcomed by hot hatch fans.But a hot hatchback must be relatively easy to live with in day-to-day driving, so Honda has added a ‘comfort’ mode to the Civic Type R’s driving mode selector. This will mean that when owners aren’t pressing on in Sport or +R modes, the Civic Type R’s suspension, steering, accelerator and gearchanges will be softened.

Honda is sticking with a front-wheel drive format for the new Type R, so while it might not be able to provide the straight-line performance of four-wheel-drive ‘mega-hatches’ like the Ford Focus RS and Mercedes-AMG A 45, it could beat the Peugeot 308 GTi and SEAT Leon Cupra to become the world’s fastest front-wheel-drive hatchback. Honda is understood to be planning to recapture its lap record at the Nürburgring racetrack in Germany to underline the point. 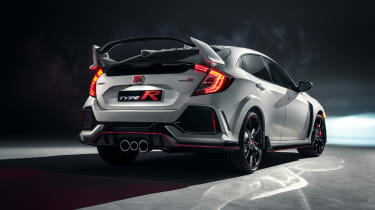 The Honda Civic Type-R will hit UK showrooms in July, priced at £30,995 for the entry-level car or £32,995 for the Type-R GT with dual-zone climate control and improved infotainment including sat nav, wireless mobile phone charging and a more powerful stereo.