The all-electric I.D. Crozz will offer Tiguan buyers an EV alternative from 2020 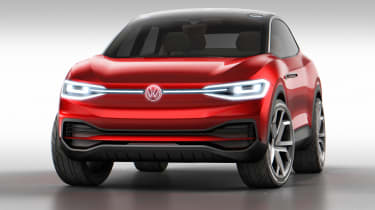 Volkswagen is investing €6bn in electric mobility over the next five years, and one of the first fruits will be this, the VW I.D. Crozz. It's expected to arrive in 2020 as part of a wave of 27 EV models from the Volkswagen Group, closely following the Golf-sized I.D. hatchback due in late 2019.

The I.D. Crozz is a part-SUV/part-coupe that was seen at the Shanghai Motor Show in April 2018 and was revealed in an updated state at the Frankfurt Motor Show later in the year. Its second outing saw various design changes and a striking Hibiscus Red Metallic paint finish.

One aspect of the changes was a new interior, offering more space. The doors do without a central pillar; the front doors open wide and the rears slide allowing great access to the passenger compartment. 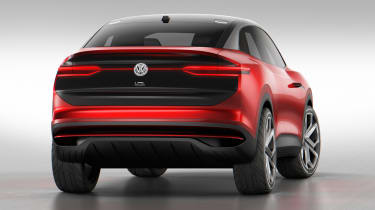 The I.D. Crozz will be engineered to take advantage of fast charging, with a top-up to 80% taking around 30 minutes thanks to "a new generation of high-performance batteries". The batteries will also be modular, meaning larger or smaller battery packs can be fitted. It's likely customers will therefore be able to pay extra for a larger battery pack, potentially bringing enhanced driving range and performance, in a similar way to the Tesla Model S.

Other technology includes a CleanAir system, which provides information on the quality of air, and a new voice-control system, which can operate the car’s doors and autonomous driving modes.

The I.D. range will sit on Volkswagen’s MEB, or ‘Modular Electrification Toolkit’ platform, which has been specifically designed to accommodate batteries and electric motors. The I.D. Crozz will make the most of this platform, as it’ll come with a large 515-litre boot and will offer four-wheel drive.

The Volkswagen I.D. Crozz is expected to use one electric motor at the front and one at the rear to produce 302bhp. This should allow it to reach a top speed of 111mph. Handling characteristics are said to be “on par with those of a Golf GTI” thanks to optimised weight distribution and electronically controlled suspension components.

More importantly, the coupe-SUV will be able to travel 310 miles on a single charge and the battery can be charged to 80% capacity in 30 minutes using a fast charger.

This means buyers after the cheapest EV option should get a range of roughly 250 miles, while those willing to spend a little more will be able to go 373 miles between recharges – although VW is officially targeting 310 miles for the I.D. Crozz. 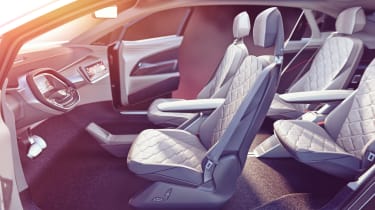 Volkswagen is at the forefront of the drive towards electric vehicles and the EVs it produces will wear the I.D. prefix when they arrive. The I.D. Buzz ride-hailing microbus concept was announced at the start of the year, while the I.D. was unveiled a few months later. By 2022, the VW Group will have 27 all-electric MEB models in production.

The I.D. Crozz will be Volkswagen’s electric SUV offering when it arrives in a few years, but before that comes along, the Volkswagen I.D. will hit showrooms. It’s due in late 2019 and Volkswagen says it’ll be in the same price bracket as the Golf, indicating the company is serious about marketing its electric cars.