Scrappage plus other incentives and grants could total £8,500 off the price of a new VW e-Golf 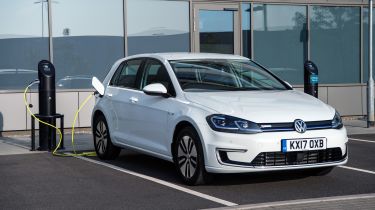 While most of the brands see their scrappage schemes end on 31 December 2017, The Volkswagen scheme has been extended to run until 2 April 2018, with Audi's programme ending on 31 March – just as long as the car ordered is delivered by 30 June 2018. Volkswagen has reduced the incentives on some of its models, and the Golf GTE is no longer included in the scheme.

The programme is open to owners of cars adhering to Euro 1-4 emissions regulations – typically cars built before 2010. The VW Group is the latest in a line of scrappage offers, which includes Toyota, Ford, Hyundai and Vauxhall.

Volkswagen's scrappage scheme sees incentives of up to £6,000 being offered against new petrol, diesel, plug-in hybrid and electric models. The announcement means that the £4,000 scrappage saving on a new e-Golf, combined with the £4,500 provided through the government’s Plug-in Car Grant, means savings total £8,500 on a new electric Volkswagen e-Golf.

Total savings on other plug-in hybrid models total £8,500 and £7,800 for the Passat GTE and e-up! and respectively.

Audi’s version of the scheme sees savings of between £2,000 and £8,000 off the price of a new car, although diesel Q7 models, the A8, R8 and the RS range of models aren’t included in the scheme. Audi says that although the scrappage incentive replaces the usual part-exchange value that would ordinarily be offered, the average discount is around £2,500 extra.

The vehicle being traded in must have been registered to the owner for at least six months, and will be scrapped, rather than sold on.