“The Volkswagen Golf SV has a taller roofline than the standard Golf hatchback, making it a practical rival to the Ford C-MAX”

If you love the Volkswagen Golf, but need some more space, the Golf SV takes the iconic hatchback and stretches its proportions. The resulting Ford C-MAX rival isn’t quite an MPV, but it does have more passenger space and a bigger boot, along with a great view out.

Boot space isn’t quite as vast as you’ll find in the Volkswagen Golf Estate, but the Golf SV is easier to get in and out of, which makes it well suited to drivers with small children. Thanks to a range of advanced engines, running costs are low, too, which could even entice some business drivers.

Bridging the gap between the Golf hatchback and Volkswagen Touran MPV, the design of the Golf SV completes the jigsaw puzzle, with the familiar grille and headlights that form VW’s ‘family face’. Tall windows give it a less sporty design than the hatchback, but features like silver roof rails mean the SV looks ready for a trip away with some bikes on the roof. 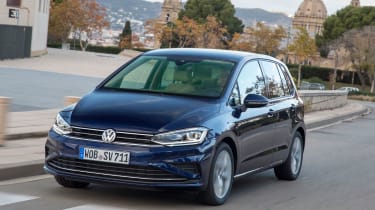 A key feature of the Golf is its upmarket interior, and here the SV is on a par with the rest of the range. Sharing the same in-car technology and many familiar controls for things like the air-conditioning, the SV feels well equipped and solidly built. MPV-inspired features can be found, too, with picnic tables behind the front seats, a second row that can slide on runners and a front passenger seat that folds flat for carrying long items.

The Golf SV benefits from most of the same engines as the hatchback, with petrol engines from 84 to 148bhp and diesels from 113 to 148bhp, most of which come with either a six-speed manual or seven-speed automatic DSG gearbox, offering fast and precise changes without a fuel-economy penalty.

With enough power to make it impressive to drive, the 2.0-litre TDI with 148bhp is a good choice and can still return 52.3mpg. All of the engines are sensible, and any of the petrols will return over 45mpg when fitted with a manual gearbox. The smaller diesel is the economy champion of the range, offering up to 55.4mpg, which might make it a good option for company car drivers. 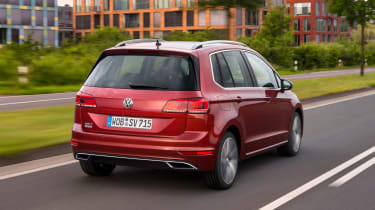 The GT sits at the top of the range, with larger alloys, sportier suspension, ambient lighting and access to online services. Given its high price and the fact it’s only available with a smaller selection of engines, the GT is best avoided; we think the Match offers the best value in the range.

Volkswagen has a great reputation for building strong vehicles and the Golf SV is no exception, with a five-star safety rating from Euro NCAP in 2014. All cars now include autonomous emergency braking, as well as a host of standard airbags and other safety features.

While the Golf SV itself didn’t feature in our 2019 Driver Power customer satisfaction survey, the Golf it’s based on came 41st out of 100 models, receiving praise for its handling, ease of driving and performance.