The Volkswagen Golf SV has low running costs, similar to those of the standard Golf hatchback. That comes thanks to a range of efficient engines – all of the petrols with manual gearboxes promise more than 45mpg if you drive gently. Every version of the Golf SV costs £140 in annual road tax.

The diesel engines in the Volkswagen Golf SV both offer excellent economy, but the stand out for absolute economy is the 113bhp 1.6-litre engine. It can return 55.4mpg and CO2 emissions of 113g/km make it a good choice for company-car drivers. Choose the DSG automatic gearbox and its CO2 emissions actually drop to 109g/km, while the fuel consumption is slightly higher at 52.3mpg.

However, the 148bhp 2.0-litre diesel can match that figure of 52.3mpg and has much more power for overtaking. If you can afford it, we recommend going for this engine, because you won't notice a difference in economy between the 1.6-litre and the 2.0-litre, and the 2.0-litre engine is better if you plan to drive the car fully loaded often. With slightly higher CO2 emissions of 120g/km, it won't be as appealing for company-car drivers.

The 84bhp 1.0-litre TSI is the most economical petrol engine, with an official fuel economy figure of 47.9mpg. We'd recommend avoiding this engine if you can afford to do so, because it's only available on the entry-level S model and struggles with a full complement of passengers and luggage. Much better is the more powerful 113bhp version of the 1.0-litre engine, as it offers the same 113g/km CO2 emissions and a negligible drop in fuel economy. There are also 128 and 148bhp 1.5-litre petrols which can shut down two of their four cylinders when not needed to save fuel. All will return between 42.8 and 45.6mpg and emit 115-124g/km of CO2, depending on gearbox choice. The lower-powered petrol engines are the best for company-car drivers due to their lower Benefit-in-Kind (BiK) rate, but none of the petrols will be expensive to run. 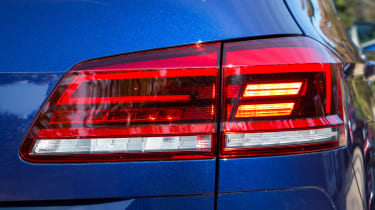 With the 1.0-litre offering such good economy, it’s worth determining whether a diesel SV will actually save you any money. The diesel models may be slightly cheaper to run, but they are significantly more expensive to buy, so the money you save on running costs won’t be recouped as quickly as you'd expect.

Most engines are available with the DSG twin-clutch automatic gearbox for around  £1,400 extra and it’s worth considering as this does help improve the SV’s performance, fuel economy and refinement.

The Volkswagen Golf SV falls into insurance groups 9 to 18. The 84bhp 1.0-litre is the cheapest and is rated in group 9, which makes it reasonably cheap to cover. If you want to go for one of the diesels, the 2.0-litre TDI with 148bhp falls into group 18.

VW sells the Golf SV with a fairly standard three-year/60,000-mile warranty, which is comparable to the likes of the Ford C-MAX and Citroen C4 Picasso. But this has been left looking miserly by the likes of Kia, which sets the benchmark in this market with the seven-year/100,000-mile cover offered on the Kia Carens MPV. An extended warranty is available: you can increase cover to four years/75,000 miles for £250 or to five years/90,000 miles for £565.

Variable service intervals apply to every model in the VW Golf range, which can make it difficult to budget for maintenance. However, the company offers a pre-paid servicing package to all customers buying a new Golf.