The Volkswagen Golf SV was designed from the outset to excel in one particular area – and this is it. The taller and wider dimensions of the new model compared to the old Golf Plus, plus the 48mm increase in the distance between the front and rear wheels means it’s easier to get in and out. 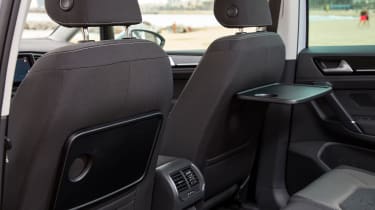 The SV isn’t all that impressive as an MPV, though, as it lacks the versatile seating of cheaper rivals like the Citroen C4 SpaceTourer. It many respects it feels like a slightly bigger Golf, but that means most buyers would be better off with a proper five-seat people carrier.

Once inside, there’s plenty of space – more, in fact, than the Ford C-MAX and Renault Scenic. One downside is the middle seat in the second row, which is compromised by the tall transmission tunnel in the floor restricting foot room. However, VW has cut away some space in the side of the transmission tunnel cover to make space for the fifth passenger’s feet.

The Volkswagen’s rear seats also miss out on the flexibility of high-spec Ford C-MAX models, which feature seats that can tumble forwards and be removed completely if needed.

The Golf SV suffers in direct comparison with fully fledged MPVs. The Citroen C4 SpaceTourer is cheaper and more adept at carrying a full load of passengers, while the Renault Scenic has removable rear seats to extend the load area. It’s best to think of the SV as what it is – a Golf with extra versatility.

Need to carry larger loads? The Golf SV’s rear seats slide forward (which frees up 590 litres of space) and also fold flat, creating a 1,512-litre storage area. That’s 76 litres more than in the old Golf Plus and 25% more than the regular Golf hatchback. All trim levels offer a full-size spare wheel.

However, this outright load-lugging capacity is considerably less than its more utility-focused rivals. The Renault Scenic, for example, offers a total load capacity of 1,870 litres once its seats are removed. In fact, even the SV’s Volkswagen Golf Estate sister offers more total space, at 1,620 litres. 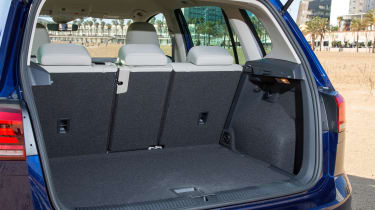 It’s a well-shaped load area, though, and just the job when it comes to family holidays or carrying buggies or wheelchairs. It also provides a good compromise between passenger space and load-lugging versatility, as not only do the seats fold flat, but they also slide back and forth to give you more room in the boot or more passenger legroom as needed.

The back seats can also recline, an advantage over the regular Golf that ensures the comfort of rear-seat passengers. Also handy is the way the rear seatbelts are separate from the seat, so they don’t get snagged when you’re moving the seats back and forth.

The best model to go for if you need reasonable towing capacity is the 2.0-litre 148bhp TDI diesel – it can tow braked weights of up to 1,600kg. The most powerful petrol engine can manage 1,500kg, but the 128bhp version drops that maximum to 1,400kg. The 1.0-litre TSI is best avoided if you plan on towing, with a maximum of just 1,000kg.