This kind of full-bodied family workhorse isn’t designed for style, but the Golf SV isn’t quite as ungainly as some rivals. It’s clear that the focus is on practicality and interior space, but the SV’s bulkier proportions are well disguised by sharp lines and squared-off panels. The Golf family face has been integrated into the nose and roof rails are a visual reminder that the car is intended for an active life.

The Match trim level is expected to be the most popular with buyers. It comes as standard with alloy wheels, parking sensors, an eight-inch touchscreen, plus a multifunction steering wheel. It must be said, though, that certain rivals like the Citroen C4 SpaceTourer do the same job in a rather more stylish manner. 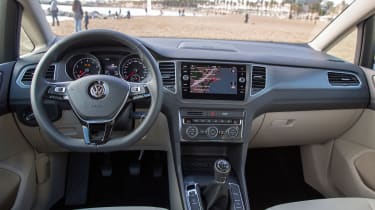 The Volkswagen Golf SV’s dashboard is nearly identical to the standard Golf’s, although the layout doesn’t focus quite so much on the driver. It’s still one of the best in the business – solidly constructed, pleasant to look at and easy to use. Plus, all the switchgear operates smoothly and with reassuring precision, so from the moment you get the keys, the Golf SV feels as if it’s been built to last, which bodes well for its reliability in the long term.

The interior is also just as quiet as the Golf's at speed, although the economical 1.0-litre petrol engine is noticeably more hushed than the 1.6-litre diesel. While it undoubtedly feels well built, the interior can seem a bit bland once you’ve sat inside a Citroen C4 SpaceTourer.

The SV also has a slightly raised driver’s seat for better visibility of the road ahead, and the car also gets all the same adjustment as the normal Golf, so getting comfortable behind the wheel should be easy.

Every version has a colour touchscreen infortainment system of at least eight inches with DAB and Bluetooth connectivity, while mid- and high-spec cars feature Apple CarPlay and Android Auto connectivity.

The S trim has the least amount of standard kit on offer, so prepare to see several blanked-off buttons scattered across the dashboard. It does have that eight-inch touchscreen infotainment system, heated door mirrors and air-conditioning, though, along with a clever battery regeneration system, which uses heat produced by the brakes to charge the battery. 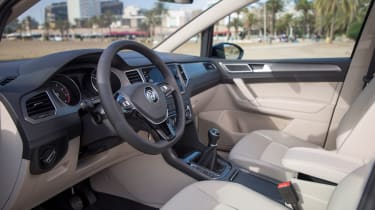 The range-topping GT model has 17-inch alloys and lowered sports suspension, which give the car a sporty look, but seem a little misplaced on this kind of car. It also makes the ride feel a little bit too firm for a family wagon. It’s not that it's hugely uncomfortable, it's just not a setup that suits a car liable to carry restless children for long distances. If you want the GT and all the extra equipment that comes with it, the only way to ensure decent ride quality is to pay an extra £830 for the adaptive suspension, which has a comfort setting.

We’d stick with the Match, which – like the S – uses suspension largely unchanged from the standard Golf’s and doesn’t suffer too much from the extra weight, with a ride which is still comfortable, even if the the body does lean more in corners.

We recommend the Match model if your budget will allow it, and suggest adding the options mentioned above to optimise it as a day-to-day family workhorse. The Match is a well equipped car and has many practical touches as standard, such as a storage compartment in the roof, as well as driver’s and passenger’s under-seat trays.

Built-in sat nav is standard on the Match and GT, but a £795 option on the S. ‘App-Connect’ is an important option if you have a smartphone, allowing Apple CarPlay, Android Auto and MirrorLink connections along with voice control for £175. The standard stereo will be capable enough for most music fans, especially as you not only have the huge range of digital radio stations to choose from, but can also plug in your smartphone to listen to your favourite digital tracks on the go. An upgraded Dynaudio pack is available, comprising a 10-channel set-up with a 400w amplifier and nine speakers.

VW offers front and rear parking sensors for £490 on the S (as long as you combine it with the Mirror Pack), with a rear-view camera for an additional £345. Plus, the Park Assist system (which measures spaces at the side of the road to find a suitable one, then takes control of the steering for parallel or bay parking manoeuvres) is available for £600.