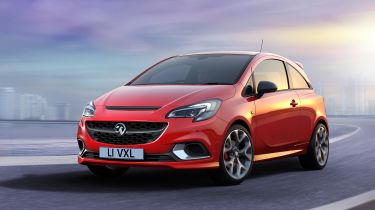 The Corsa GSi marks the return of a set of much-loved initials that drivers of a certain age might remember fondly. While the '90s hot hatch of the same name was positioned right at the top of the Corsa range, today's reincarnation will appeal to a broader audience. It goes head-to-head with sporty hatchback rivals such as the Suzuki Swift Sport, Ford Fiesta ST-Line and SEAT Ibiza FR.

With 148bhp from its 1.4-litre turbocharged engine, a 0-62mph time of 8.9 seconds and a 128mph top speed, the GSi has a respectable turn of speed yet retains a sensible Group 20 insurance rating – far lower than the 202bhp Corsa VXR that’s now discontinued. That much-loved model is likely to return in a different form, though – hybrid power looks likely for the next-generation Corsa VXR.

As well as straight line speed, the GSi is kitted out to make its performance accessible on twisty roads. A ‘short-ratio’ six-speed gearbox has been fitted to make the most of the engine’s mid-range punch, so the important 50-70mph burst in fifth gear takes just 9.9 seconds. Vauxhall promises that the GSi will draw from the VXR's handling know-how, too. Offered in three-door form only, the Corsa GSi will be distinguished by a honeycomb grille and large front bumper air intakes, while extended sills, a deeper rear spoiler and carbon-fibre details channel some of the VXR's spirit.

Sports seats, aluminium pedals and a flat-bottomed, leather-trimmed steering wheel add a racy air inside, and the brakes are taken straight from the Corsa VXR – you'll be able to glimpse their red-painted brake calipers through the spokes of the GSi's 17-inch alloy wheels. The VXR has also donated its suspension to the cause, so even if the GSi can't quite match the power of its discontinued bigger brother, it should equal it for poise and agility. 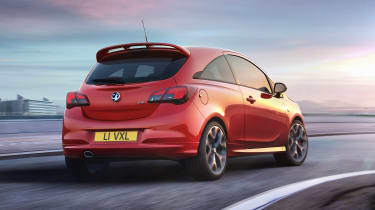 As models like the Vauxhall Insignia Grand Tourer GSi hatchback and Sport Tourer estate have shown, the GSI initials have now come to signify a blend of driver involvement and fuel-efficiency. The sporty Corsa's turbocharged petrol engine has also been designed to meet tough new emissions legislation, and returns 47.1mpg while emitting 139g/km of CO2.