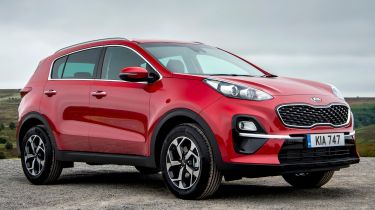 The updated Kia Sportage SUV has become the first car from the Korean brand to offer mild-hybrid technology. The system’s principal purpose is to supplement acceleration, helping improve efficiency of the 2.0-litre diesel engine in the range-topping model.

The Sportage, which is a rival to the Nissan Qashqai, Ford Kuga and Renault Kadjar, has been treated to a new look inside and out. The front and rear bumpers have been restyled and there's a new range of 16, 17- and 19-inch alloy wheels, plus five new paint colours. New full-LED headlights with LED daytime running lights and redesigned fog lights keep the car looking up-to-date, particularly when combined with an updated version of Kia’s ‘tiger-nose’ grille, which is available in gloss or matt black. 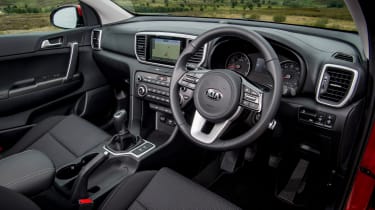 Inside, there's a redesigned steering wheel, instrument cluster and revised upholstery, while GT-Line cars stand out with two-tone leather and gloss-black exterior trim.

A revised engine range includes a 1.6-litre petrol, a more powerful turbocharged version of that engine, the 48v 2.0-litre diesel and a new 1.6-litre diesel.

The latter replaces the 1.7-litre previously on offer. Available with 114 or 134bhp, the 1.6-litre diesel comes with a six-speed manual and front-wheel drive as standard but can, in the more powerful form, be had with a seven-speed, dual-clutch automatic gearbox and four-wheel drive.

Trim levels consist of 1, 2, 4, Edition 25, GT-Line and GT-Line S. The Edition 25 and the GT-Line trims effectively take the place of a 3 trim level in the range, between the 2 and 4 models, while the 4 and GT-Line S models are the range-toppers.

The Edition 25 model is only available with the 1.6-litre petrol engine and has 17-inch alloy wheels, cloth and leather upholstery, eight-inch touchscreen sat-nav, upgraded paint and a JBL stereo. It starts at £25,655.

The 4 model starts at £27,260 and has the same eight-inch touchscreen and JBL sound system as the Edition 25, as well as 19-inch alloy wheels, electric leather seats, a panoramic roof, keyless go, LED lights and silver skid plates. 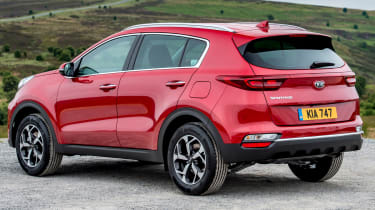 Technology gets a boost, too. Kia's latest active cruise control can match the speed of the car in front, even drawing to a halt before pulling away in stop-start traffic. Driver fatigue warning is offered, as is an around-view monitor system for safe and easy low-speed manoeuvring.

After debuting in the Sportage, Kia's mild-hybrid technology, which it calls 'EcoDynamics+' will also appear in the Kia Ceed hatchback in 2019 and then in other models in the range. Kia says it should reduce CO2 emissions by up to 4%, as measured using the latest Worldwide harmonized Light vehicles Test Procedure (WLTP)

Kia says that EcoDynamics+ technology can be used in petrol and diesel cars with front, rear or four-wheel drive, so it could appear in any future Kia model. Its introduction is part of Kia's 2025 Electrification Strategy, under which the company intends to have launched 16 'advanced powertrain' vehicles by 2025, five each of which will be hybrids, plug-in hybrids and pure battery-electric vehicles. The 16th – scheduled for 2020 – will be powered by a hydrogen fuel cell.

Kia says that its mild-hybrid technology reduces engine load when the car is being driven more gently, as well as providing extra power for acceleration. There's a mode for harnessing energy released during braking to recharge the 48v battery and a 'moving stop and start' function that can switch off the engine as you're slowing down, before the car has come to a complete halt.

First examples of the new Kia Sportage will arrive in UK showrooms during August, with prices ranging between £20,305 and £34,545. 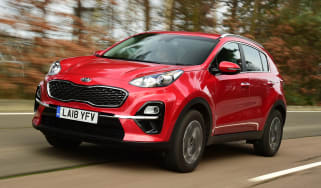