Over 70% of drivers misunderstand 'semi-autonomous' features 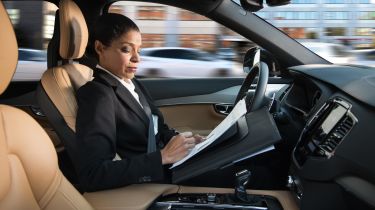 Research from two of the leading names in car safety has found that some drivers believe their cars to be 'autonomous', when the truth is actually very different.

The bodies also have concerns that such systems – intended to provide driver assistance rather than taking over entirely – have been marketed as being 'semi-autonomous' or even 'self-driving', as car manufacturers race "to gain competitive edge".

How do drivers interpret 'semi-autonomous' driving?

In a survey commissioned by Euro NCAP and Thatcham, 71% of 1,500 drivers thought self-driving cars are on sale today, and one in 10 motorists admit they'd consider taking a nap while using assistance systems. And, should a crash result, only 51% of motorists thought they should be held responsible.

A total of 18% of drivers, meanwhile, feel that a car capable of automatically steering, braking and accelerating enables you to "sit back and relax and let the car do the driving".

Several manufacturers' marketing materials have come under scrutiny, with Thatcham and Euro NCAP highlighting that Mercedes says its C-Class is “able to drive semi-autonomously in certain situations”. The BMW 5 Series is described as offering “semi-autonomous driving due to Driving Assistant Plus,” while Tesla, Volvo, DS and Audi have also been called out for making claims that can potentially be misinterpreted.

The limitations of driver assistance systems

Driver assistance systems are seen as a vital selling point when a new car is introduced. Some of the most common are adaptive cruise control (ACC), which maintains a set distance from the car in front by matching its speed, and lane-keeping assistance (LKA), which makes steering adjustments to keep a vehicle within its marked lane. When operating together, these can create the impression that the car is driving itself.

In reality, the car is merely assisting the driver, and there's a fear that drivers are handing responsibility over in full to technology that's designed only to make driving safer and easier. Thatcham and Euro NCAP deemed some systems to be "too effective" – the adaptive cruise control system found on the Tesla Model S “risks an over-reliance on the assistance system, with the vehicle being primarily in control".

Some systems, however, were judged better at keeping the driver involved. The BMW 5 Series and DS 7 Crossback, for example, were found to leave the driver primarily in control, and the Audi A6, Ford Focus, Mercedes C-Class, Volvo V60 and Nissan Leaf were judged to offer “a balance between driver and system assistance”.

These general assessments, though, are based on the car moving in constant, predictable traffic, and don't take unexpected 'emergency' situations into account. Euro NCAP has developed tests to assess how active cruise control reacts when cars suddenly cut into traffic ahead, or when a car being followed abruptly moves out of the way to reveal a stopped vehicle ahead.

“All of the cars [tested] were found to be seriously lacking," the safety assessors said about these cut-in and cut-out tests. Thatcham expanded on the results and said “none of the systems were able to help and crashes could only be avoided if an alert driver braked or steered away from trouble.”

A similarly rigorous test has been devised for lane-keeping assistance, with cars sent through a marked S-bend and LKA left in charge of the steering. All the cars tested “allowed the driver to cooperatively steer and manage the situation apart from the Tesla.” Thatcham and Euro NCAP agreed that the Model S “doesn't allow the driver to deviate from the lane-centering path and will disengage when a driver inputs steering torque”.

Thatcham and Euro NCAP have big concerns over the marketing of these technologies. While the researchers say that “generally, official marketing content is clear in what the role of the driver is,” attention was drawn to a BMW 5 Series promotional video that was considered "misleading". In the video “the driver takes their hands off the wheel where it is assumed that the vehicle can drive autonomously”. Criticism was also leveled at a number of Tesla marketing pieces that “suggest vehicle autonomy”.

Matthew Avery, head of research for Thatcham, said: “Some carmakers are designing and marketing vehicles in such a way that drivers believe they can relinquish control. Carmakers want to gain a competitive edge by referring to ‘self-driving’ or ‘semi-autonomous’ capability in their marketing, but it is fuelling consumer confusion. This is exacerbated by some systems doing too much for the driver, who ends up disengaged.”

He added: “today’s technology supports the driver. It is not automated driving and it is not to be relied upon at the expense of driver attentiveness.The driver is in control and must always remain alert. If used correctly, these systems will improve road safety and reduce fatalities, but they won’t if naming and marketing convinces drivers that the car can take care of itself."