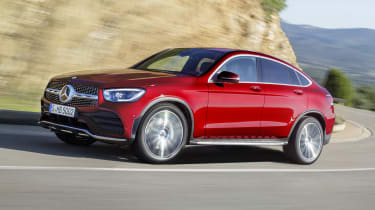 The Mercedes GLC Coupe has received a midlife update, bringing it into line with the recently facelifted GLC. Changes to the engines and interior lurk behind minor styling updates, with the facelifted model on sale in the UK later this year. It has few direct rivals, with the BMW X4 one of the only other choices if you want a coupe SUV.

While it looks very similar at first glance to the outgoing model, the new GLC Coupe is different enough to keep it fresh. At the front, both the bumper and grille are new, and the changes are echoed around the back with a changed diffuser and exhaust tips. The LED headlight units now offer the same C-shaped daytime running lights as the GLC, and the tail-lights look to have been tweaked, too.

Most reliable cars on sale in 2019

The interior represents a step-up over the outgoing model. Whereas the current car uses Mercedes’ ageing ‘Command’ setup, with analogue dials, the new car features the company’s latest ‘MBUX’ infotainment software with a 12.3-inch digital instrument cluster and a new 10.25-inch central touchscreen. Unlike the Mercedes A-Class, however, it doesn’t benefit from having the two screens side-by-side. The centre console, steering wheel and air vents have also been updated. A new touchpad is included, or you can control the infotainment with gestures or your voice, if you wish. The interior in this car is a brand-new colour as well.

Five engine choices are available - three diesels and two mild-hybrid petrols - and all feature grippy four-wheel-drive as standard. A manual gearbox option is unlikely. In the petrol line-up, the choice is either GLC 200 or GLC 300 - but that doesn’t equate to the power outputs, as you might expect. The former uses a 1.5-litre four-cylinder engine and a 48V generator system, together producing 192bhp. The 300 model, meanwhile, has a 2.0-litre petrol engine and produces 254bhp. Claimed fuel economy and emissions figures of 38.1mpg and around 165g/km are the same for both models.

If a diesel engine makes more sense, there are two different engines to choose from. Kicking the range off is a 1.6-litre twin-turbo engine with 158bhp, while a turbocharged 2.0-litre engine is available with either 189bhp or 238bhp. To reduce harmful emissions, all GLC diesels come with a particulate filter and AdBlue injection, among other measures.

The new GLC Coupe also features a range of new driver assistance systems, such as an exit-warning function and a system that pulls the car over to let emergency vehicles through, plus plenty of extra equipment to choose on the options list. These include adjustable dampers, air suspension, a 360-degree camera and an ‘Energising Comfort Control’ package, which is said to change the car’s climate control, ambient lighting and massaging functions to match your mood.

Mercedes hasn’t revealed the prices for the new GLC Coupe yet, but expect an entry point of around £42,000 - it won’t cost much more than the current car. A new model is likely to mean that you’ll be able to pick up great deals on pre-registered, ex-demonstrator and used GLC Coupes.

Sink into our list of the most comfortable cars on sale, or read our review of the current Mercedes GLC Coupe to see how it compares.