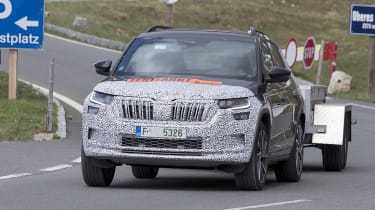 Photographers have captured the first pictures of the facelifted Skoda Kodiaq. The car is partly camouflaged, so few details have been given away but the images do offer hints about the new car. Likely to be revealed at the 2020 Geneva Motor Show, the facelifted Kodiaq will go on sale in late spring next year, with prices similar to the current model.

The current Kodiaq starts from just under £25,000, while the range-topping diesel vRS model costs around £42,000. The Kodiaq is one of our favourite seven-seat SUVs, even among rivals like the Peugeot 5008, Nissan X-Trail, SEAT Tarraco and Hyundai Santa Fe.

Skoda doesn’t tend to make massive changes when it updates its cars, and, judging by the images, the same looks to be true for the facelifted Kodiaq. The front and rear of the car are camouflaged in a special wrap to make it harder to spot changes but the rest of the car isn’t covered - most of the bodywork is expected to stay the same. 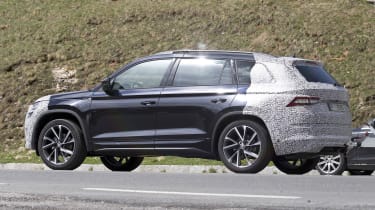 At the front, the lower air intakes look to be a different shape, and the headlights may be a little slimmer, like the ones fitted to the facelifted Skoda Superb. The current Kodiaq’s lower lights and the wide grille remain. Changes to the back end will be similarly hard to notice but we think the tail-lights have been redesigned to incorporate more LEDs. Expect the rear bumper to be a slightly different shape too.

Changes to the interior of the car are likely to be more noticeable. The Kodiaq’s dashboard design is starting to look a little dated compared to newer cars, so the facelifted version may get a ‘floating’ touchscreen lifted from the new Skoda Scala hatchback. We also expect new trim finishers and advanced safety technology to be standard across more of the range. At the moment, only the top-spec Kodiaq Edition features blind-spot warning and auto-dipping headlights.

Most of the touchpoints will stay the same, however, as they’re used extensively throughout the Volkswagen Group’s portfolio of cars. As the main bodywork isn’t covered by a camouflage wrap, we expect no extra passenger or boot space but the current Kodiaq isn’t lacking in either department.

The main engine range is likely to stay untouched, so you’ll have a choice of two petrol engines and two diesel engines (excluding the vRS model). Kicking off the range will be a 148bhp 1.5-litre petrol engine with on-demand cylinder shutdown, front-wheel drive and a manual gearbox. The other petrol is a 187bhp 2.0-litre engine with four-wheel drive and a DSG automatic gearbox, while both diesels are 2.0-litre units and offer the same power outputs as the petrols.

Read our guides to the best SUVs and most economical SUVs to see where the Kodiaq features in these lists. 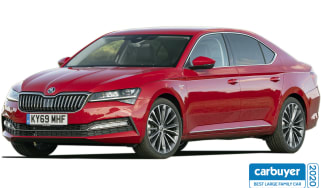