Porsche has put a six-cylinder engine back in the Boxster for the 718 Spyder but is it the one to buy? 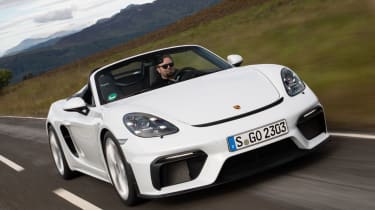 In a word, yes. Its engine, borrowed from the larger and more expensive Porsche 911, is just one aspect of the car that stands out. Producing 414bhp from 4.0 litres and six cylinders, the 718 Boxster Spyder accelerates from 0-62mph in just 4.4 seconds (the same as the Cayman GT4 coupe) and goes on to 186mph. Both Spyder and GT4 get a sublime six-speed manual gearbox that Porsche only fits to its most driver-focused cars. With all that performance on offer, it’s not surprising that Porsche claims 25.7mpg for the Spyder.

Best convertibles to buy this year

While the engine provides the power, the Spyder’s appeal doesn’t stop there. The steering is exquisitely direct and has all the feel you could wish for, the brakes feel perfect and inspire confidence, and you can sense what’s happening between the car and the road through the seats. Find a special, twisty stretch of road and the Spyder is simply breathtaking to drive, but it’ll even excite at normal speeds. Everything about the car feels right and, even at 40mph, it’s delicate, posed and special. Not all sports cars manage this, and the 718 Spyder shames six-figure supercars for driver engagement. 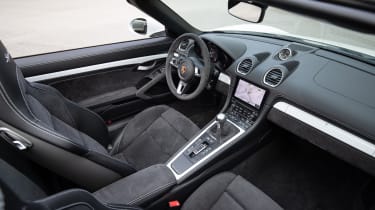 The six-cylinder engine means it has the noise to match, with glorious sounds coming from the exhaust. Choosing the Spyder over the coupe-only Cayman GT4 means you can lower the roof and hear the engine unmuffled.

The Cayman GT4 and Boxster Spyder might have the same engine but the former is much more track-focused. Consequently, the Spyder’s interior is that bit more luxurious by comparison, with coloured accents and special ‘Spyder’-branded seats. The Spyder also gets the PASM active suspension as standard (the GT4 doesn’t), alongside the Sport Chrono pack, which is usually a costly optional extra. Both cars have Michelin Pilot Sport Cup 2 tyres, made specifically for Porsche.

Outside, the Spyder is much more subtle than the GT4, and its aerodynamic add-ons aren’t so dramatic. Instead of a fixed boot spoiler, it has the standard one that raises automatically at speed, and the front splitter below the bumper isn’t so pointy. Its twin buttresses help it look much more elegant and sophisticated than the Cayman; you can imagine it parked in an exclusive marina, whereas the GT4 looks at home on a racing circuit.

At £73,405 it may be expensive but the driving experience is worth every penny. There are few cars that can match its excitement and purity, and the Spyder has immediately become the jewel in the Porsche 718 Boxster line-up. It’s almost certain to be worth big money on the used market too.

Read our Porsche 718 Boxster review for more information, or see where the Porsche 718 Cayman features on our list of best sports cars. 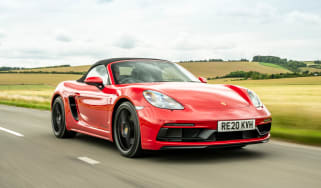 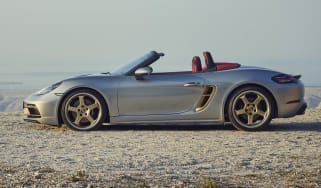