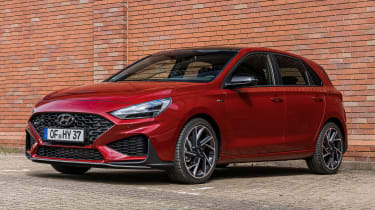 The facelifted Hyundai i30 starts from £20,695 and is now available to buy. It’s about £3,000 more than the pre-facelift car, but features sharper styling, a new touchscreen, extra equipment and emissions-reducing mild-hybrid technology on every engine. Rivals include the Kia Ceed, Renault Megane and Vauxhall Astra.

The i30 trim line-up has also been amended, with a new SE Connect model replacing the three previous entry-level specifications.

2020 Hyundai i30 facelift prices and specs

The SE Connect offers 16-inch alloy wheels, auto headlights, a reversing camera, air conditioning and an eight-inch touchscreen with smartphone mirroring. The Premium trim costs an extra £3,000 and includes much more standard equipment, such as LED headlights, a digital instrument cluster, a bigger touchscreen with sat nav, heated seats and wireless phone charging. Both SE Connect and Premium are available on hatchback and estate body styles. 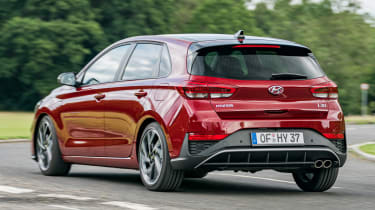 Topping the range is a new i30 N Line model, which starts at £24,695 - £1,000 more than Premium. You get a model-specific body kit and large 18-inch wheels, plus a more powerful engine. N Line is offered on the hatchback and the i30 Fastback, just like the standalone i30 N hot hatchback.

Look inside and there are plenty of differences from the outgoing model. On Premium and N Line versions, the centrally mounted infotainment touchscreen is now much wider, at 10.25 inches. It’s crisper than before and the shortcut buttons have moved to the bottom of the screen, which makes the screen look a bit tidier. Apple CarPlay and Android Auto are included, and these will be wireless later this year. 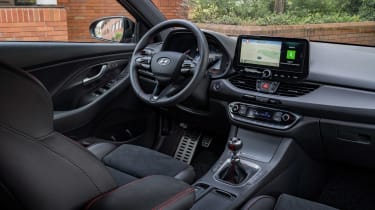 Behind the redesigned steering wheel is a seven-inch display, sitting between traditional dials for the rev counter and fluid levels. It shows the speed and trip computer information, and its display changes depending on the driving mode you choose.

The engine range has also been rejigged. The 1.4-litre petrol engine has been tweaked to become a 1.5-litre with 157bhp, and is exclusively offered on N Line spec. A turbocharger and mild-hybrid technology are fitted across the range; the mild-hybrid system recovers the energy lost under braking to engage the start-stop system more quickly. The system also allows the car to coast with the engine off.

This emissions-reducing technology also features on the 118bhp 1.0-litre turbo petrol and the 134bhp version of the 1.6-litre turbo diesel engine. The diesel engine is unsurprisingly the most economical, at 61.4mpg, but the 1.0 and 1.5 petrol engines aren’t far behind at 53.3mpg and 58.9mpg respectively. Accelerating from 0-62mph takes 11.2 seconds in the 1.0-litre petrol, around 10 seconds in the diesel and under nine seconds for the N Line’s 1.5.

An ‘intelligent’ six-speed manual gearbox is standard across the range but you can choose a seven-speed automatic on all engines. The former is now able to decouple the transmission from the engine, allowing coasting when the driver comes off the accelerator. This is a feature only previously seen in automatic models.

The plug-in hybrid drivetrain already used in the Kia XCeed SUV and Ceed Sportswagon estate is likely to feature in the facelifted i30 range at some point, as the cars share the same platform. Kia’s plug-in hybrid models use a 1.6-litre petrol engine paired to a 8.9kWh battery pack and a 44.5kW electric motor, together producing 139bhp. Zero to 62mph takes 10.8 seconds in the Ceed Sportswagon PHEV and an electric range of 37 miles is predicted.

More than three years since its launch, the Hyundai i30 has been given some midlife updates to help keep it fresh against the Ford Focus and Volkswagen Golf. We've been able to drive a prototype on British roads for the first time.

There's a notable change under the bonnet because this i30 is fitted with a new 1.5-litre T-GDI petrol engine that also gets 48-volt mild-hybrid technology. This can harvest energy under deceleration and then use it to take some strain off the combustion engine when you speed up again.

It feels rather spritely in the i30, with diesel-like pulling power at low revs. Beyond 2,500rpm there's less urgency but that's not necessarily a bad thing, as it also sounds a bit strained beyond 3,000rpm. The manual gearbox feels positive to use but it's most notable feature is the ability to disconnect drive when you come off the accelerator.

Despite this being a new technology, it works well, causing the driver no annoyances but hopefully saving fuel and reducing CO2 emissions. Considering the figures listed above, it looks to be a success. 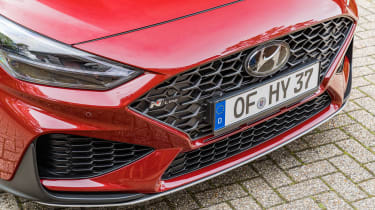 The extra technology and fuel-saving measures should keep the i30 competitive in a very strong field of family hatchbacks. Its sharp new styling should ensure it stands out more in a car park, and the i30 also impresses with its value-for-money and Hyundai’s generous five-year/100,000-mile warranty. If you’re not so bothered about having the very latest model, you should be able to get a good deal on the outgoing i30 - dealers will be looking to shift remaining stock.

Interested in knowing more about the i30 hatchback? Read our review for more information. 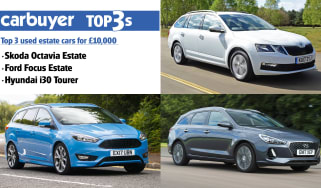