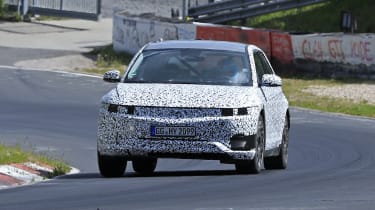 The new Hyundai 45 electric SUV has been spotted testing for the first time. Initially shown as a concept at the 2019 Frankfurt Motor Show, it appears Hyundai is planning to put the model into production largely unchanged. When the 45 reaches showrooms, it’ll be a rival to the Volkswagen ID.4, Skoda Enyaq and the Kia e-Niro, and should be priced similarly.

In many respects, the final production model of the 45 is expected to look very similar to the concept, which was inspired by the 1974 Hyundai Pony Coupe concept. The square headlights and wide, slim grille feature on this model, as do the similarly boxy tail-lights. The silhouette is close to the original design, too, and the intricate alloy wheels look to have been carried over.

The best electric SUV on sale

Sitting on the Hyundai Group’s brand-new scalable electric car platform, called E-GMP, the 45 will be the first of a new wave of Hyundai and Kia electric vehicles and will be compatible with high-capacity 350kW chargers for a sub-20 minute recharging time. Kia’s recent electric car concept had a planned 300-mile range, so we’d expect the Hyundai 45 to offer a similar amount. 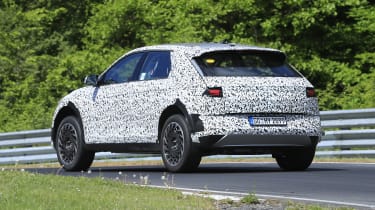 The interior of the concept featured retro-themed materials like wool floor mats, cotton upholstery and a wooden dashboard. That was paired with ultra-modern technology including a huge screen, combining a digital instrument cluster and infotainment touchscreen, as well as hidden LED ambient lighting.

A screen in front of the driver is visible in some of these spy shots, suggesting the production model won’t have any analogue dials behind the steering wheel. We don’t expect the lounge-style armchairs to reach the production model but some of the materials should feature. Blending the retro and ultra-modern will make the Hyundai 45 feel similar to the funky Honda e electric hatchback.

Read about the company’s current Hyundai Kona Electric and Hyundai Ioniq Electric models here, or see where they feature on our list of the best electric cars to buy now.