The all-new Kia Sorento has bolder styling and two hybrid options - but should you buy the new seven-seater or the old one? 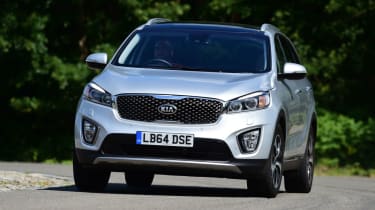 The Kia Sorento has been the brand’s largest model in the UK since its launch, and the latest version makes it bigger than ever. It’s no longer a value offering; instead, the Sorento is nipping at the heels of some pretty accomplished rivals like the Audi Q5 and Volvo XC90 - especially in top-spec trim. Unlike some of its main competitors, the Sorento gets seven seats as standard, plus a large towing capacity, and the new model introduces two new hybrid powertrains.

It’ll need to be special to outperform the previous Kia Sorento, however. Owners adore the outgoing car; it finished top in our 2020 Driver Power owner satisfaction survey. The interior and practicality came in for particular praise, while the feeling of security - both in terms of its unflappability and the driver assistance features - was welcomed by buyers too.

The Sorento is up against other big SUVs like the Skoda Kodiaq, Hyundai Santa Fe and Nissan X-Trail. Here, we see whether you should buy the brand-new model or the car it replaces. 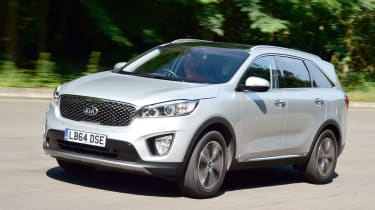 It’s always been a handsome car but the last-generation Sorento added some desirability when it went on sale in 2015. The car featured defined lines, a re-interpretation of Kia’s ‘tiger-nose’ grille and diamond-cut alloy wheels. It perhaps doesn’t have the same presence as a BMW X5 (or a car with a similarly prestigious badge), but the Kia gives you what you want from an SUV - and we think the design is more cohesive than the Hyundai Santa Fe, with which it shares its underpinnings. 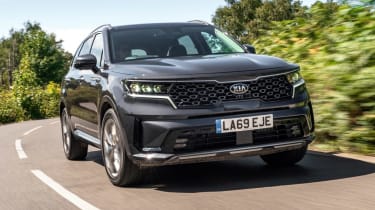 The new Sorento is far sharper, with lots more angles and slashes. New LED daytime running lights sit underneath the bright headlights, and a chrome strip connects the two light clusters. It’s all change at the rear, with vertical brake lights like you’d find on the even bigger US-market Kia Telluride. The new model certainly stands out more; you’ll decide whether that’s a good thing or not.

Kia opened a new quality control centre a few years ago and the last Sorento was the first car to come out the other side. Step inside and you might see why; there are lots of lovely soft-touch plastics, and there’s plenty of sound deadening to keep occupants cocooned from the outside. It’s not far short of cars made by the premium brands, while avoiding the bigger wheels means it’s comfortable too. We’ve not mentioned that even the base model comes with goodies like a reversing camera, cruise control and cornering fog lights. 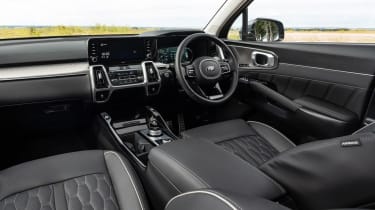 Tape over the Kia badge on the new Sorento’s chunky steering wheel and you’d be forgiven for thinking that you were in a Mercedes because Kia has put two screens side-by-side (in one long bank) on top of the dashboard - just like you’d find in the Mercedes GLS. All materials and touchpoints (perhaps except the air vents) feel like they’re made to the highest standard, and ambient lighting lifts the interior at night. LED headlights are now fitted across the range, and top-spec cars get super-soft Nappa leather upholstery.

With three rows of full-size seats and lots of space, the Sorento majors on practicality. The previous model was substantially bigger than the car it replaced although, like its main rivals, the rearmost seats are a bit cramped for adults. Access is easy, though, and with the rear seats down you have 605 litres to fill. 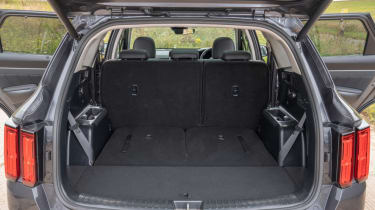 The 2020 Sorento is bigger again - the wheelbase is 35mm longer - and adults will be happier to be travelling in the boot. Impressively, even the plug-in hybrid is offered as a seven-seater, unlike the Mitsubishi Outlander PHEV. We expect the new car might top our Driver Power list for practicality, as the boot has increased to an enormous 821 litres with five seats up.

Kia’s 2.2-litre engine was the sole choice in the old model. It’s an impressive engine, with 197bhp and more than enough punch for such a big car. Zero-to-62mph takes around nine seconds, and it doesn’t feel underpowered when fully laden or when you’re towing something heavy. Not only was it carried over from the previous model, but even the very latest Sorento uses it as well. The Sorento’s bulky size means it’s far from the most economical SUV, with around 40mpg likely to be all you’ll achieve.

The engine range is a little wider in its successor, as the diesel is joined by a hybrid and a plug-in hybrid. Both use a petrol engine and an electric motor, with the PHEV gaining a much larger battery and better economy figures than the other hybrid. You can expect around 40mpg from the hybrid, while the PHEV will have a much higher quoted MPG figure - but this depends on how often you charge the battery. A full charge should enable around 30 miles of electric range.

If you want a plug-in hybrid or love the impressive twin-screen layout, it’s a simple choice - the new Sorento will be the one for you. Overall, we also think the new car offers just enough extra to recommend it over the old model. It’s more practical and eye-catching, and even more luxurious inside. We look forward to seeing whether the new Sorento can be as revered by owners as the last one.

Read our guides to the best used 7-seater cars and the most economical SUVs. 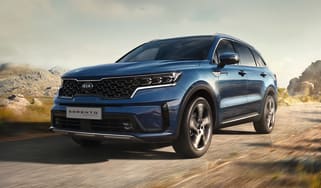 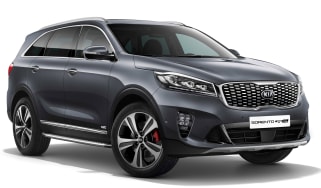