The new Peugeot 308 will cost from £14,495, with improved specifications

The new Peugeot 308 was revealed at the Frankfurt Motor Show last month and now the French manufacturer has announced prices and specs for its all-new Ford Focus rival.

This 2014 Peugeot 308, which is on sale now, aims to offer the best emissions in its class as well as a striking new design. It's likely to be a popular small family car, with the first customer deliveries from January next year.

The Peugeot 308 price and specifications have now been announced, with the new car costing from £14,495 for the basic Peugeot 308 Access with a 1.2-litre VTi petrol engine. That means it will cost around £1,000 more than the current model – but with more equipment as standard.

The new Peugeot 308 release date will be on 4 January 2014. The performance model, called the Peugeot 308 GTi, is expected to come out in 2015 and rival the Volkswagen Golf GTI, while a more practical estate version of the standard car will arrive towards the end of 2014.

The new Peugeot 308 still rivals the Ford Focus and Vauxhall Astra, but it will be slightly smaller than the current car. However, thanks to some clever dimensions, it will actually be roomier inside, with a massive 470-litre boot. That’s 90 litres bigger than the Volkswagen Golf and a massive improvement over the old car’s 347-litre boot.

The smaller dimensions of the new 308 are combined with some weight-saving measures to cut a hefty 140kg from the old car. That means it will be the most economical and efficient 308 ever, with certain models emitting only 82g/km of CO2 and getting over 80mpg.

Allure models cost from £18,645 and are even better equipped, getting full LED headlights, 17-inch alloy wheels and a reversing camera. Top-of-the-range Peugeot 308 Feline models add a panoramic roof, Alcantara sports seats and the Driver Assistance pack, which boasts features like collision alert, an emergency braking system and dynamic cruise control that can adjust its speed to mirror the car in front. Feline models start from £20,995 and come with the 128bhp 1.2-litre engine and six-speed manual gearbox as standard, while the top-spec 148bhp 2.0-litre diesel costs £24,045.

CarBuyer editor-in-chief Steve Fowler had the chance to have a first glance of the new Peugeot 308 2014, and aimed to find out what sets the car apart from its rivals.

Style and quality are what Peugeot is focusing on for the new 308, specifically targeting the BMW 1 Series and Audi A3. Peugeot design chief Gilles Vidal told Steve: “We worked hard on the proportions to give a high level of true and perceived quality. A big part of the project has been extra investment in quality materials.

“We’ve worked hard with sound engineers to make sure the sound of the doors shutting adds to the car's quality feel” – proving that Peugeot has its sights set firmly upmarket with the new car.

Along with the added equipment, the updated Peugeot 308 will get a range of efficient new petrol and diesel engines. There will be five engines to choose from, though the highlight for environmentally conscious drivers will be the 91bhp 1.6-litre HDi diesel engine capable of 93g/km of CO2. Economical 1.2-litre petrol and high-performance 1.6-litre petrol engines are also available.

An innovative three-cylinder turbocharged petrol engine and a super-frugal BlueHDi diesel will join the range from Spring 2014 – the latter of which will emit just 82g/km thanks to its six-speed automatic gearbox.

The new Peugeot 308 is available to order now, with first deliveries scheduled for 4 January 2014. 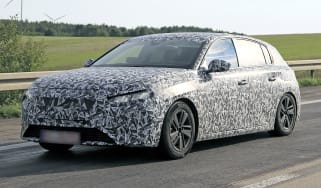