The Nissan Note uses the same engines as some of the brand’s other models, such as the Nissan Qashqai. There are two petrol engines and one diesel on offer.

This Note feels sportier to driver than the old model, which is code for the fact that the ride is less comfortable. This is thanks to firmer suspension that reduces the excessive bounciness that afflicted the old model. The Note’s light controls mean this is an easy car to drive, but overall performance isn’t its strongest point.

Then again, few of its direct competitors offer anything better. We found the Kia Venga offers a pretty mediocre driving experience and the Hyundai ix20 is underpowered. The Honda Jazz, with its ageing engine range, fails to deliver anything in the way of driving fun. Even the Renault Clio, which offers a smooth and hushed ride, slips up with its handling. 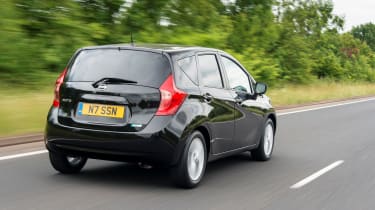 If a fun drive is essential and you’re flexible about not being tied to an MPV to meet your needs, then your best bet in this price range is a Ford Fiesta.

Of the engines on offer, the 89bhp 1.5-litre dCi diesel feels the quickest and is also the cheapest to run. It powers the Note from 0-62mph in 11.9 seconds, but can be quite noisy when accelerating, although it settles down on the motorway. This is our pick of the range and is only available with the five-speed manual gearbox.

The 1.2-litre DIG-S is quieter than the diesel, but doesn't feel as quick. This is despite it being more powerful and actually a fraction faster from 0-62mph – taking 11.8 seconds. This is the only version of the Note that gives you the option of a CVT automatic gearbox, but this will dent its performance, with the 0-62mph time increasing to 12.6 seconds.

Avoid the basic petrol engine if you can, as it's the least economical on offer and, with 0-62mph taking 13.7 seconds, also the slowest. The power output of 79bhp simply isn't very much and you'll need to work the car hard in order to feel like you're getting anywhere at a decent pace.