The Nissan Qashqai is surprisingly entertaining to drive on a twisty road thanks to suspension that resists body lean and steering that has enough weight to avoid feeling twitchy. Some of this came courtesy of the 2017 update, which brought mechanical as well as aesthetic enhancements. With attention paid to Qashqai’s suspension and steering, it feels sharp when turning into corners and can deal with rough surfaces without fidgeting.

All models employ technical wizardry to improve stability through bends by braking each wheel separately, while Active Ride Control automatically uses the brakes to cleverly reduce the up-and-down motion you get when driving over bumps. The result is that even if you choose to fit larger alloy wheels (19-inch rims are offered on the Tekna model), the Qashqai rides well in most situations, but still can’t deliver the feel an enthusiastic driver would want. The Nissan's raised ride height also gives you a good view of the road ahead, as well as a little extra agility on uneven road surfaces.

Nissan's ProPilot driver assistance package is engaged by a single steering-wheel button and operates in similar fashion to adaptive cruise control – you simply select your desired speed and set the technology working. Using radar and cameras, it maintains a safe distance from the car in front, and also steers to keep in your chosen motorway lane. The traffic jam pilot feature can bring the car to a halt, too, and pull away again when the queue starts to move.

What impresses is how gentle its steering and brake inputs are. Compared to some systems, it doesn't react as sharply or intrusively to the movements of other traffic – you can tell that it reads the road a good distance ahead and never seems 'surprised'. Of course, you have to keep your hands on the wheel and must still pay attention to the road, but it makes long motorway journeys far more relaxing. 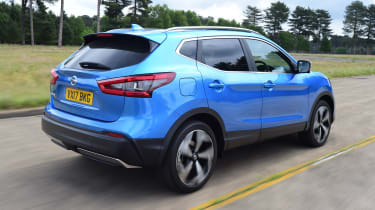 Nissan's 1.3-litre petrol engine might seem a little on the small side for a crossover of this size, but they’re more than adequate for most drivers, offering 138 or 158bhp. Even the entry-level version will prove powerful enough for most drivers. In fact, the small performance gain on the road of the 158bhp version probably isn't worth the extra outlay, which is better spent on a higher trim level or extra kit. With 25bhp more power than the old 1.2-litre petrol, the new engine is nippy as well as thrifty, making it our pick of the range. Acceleration from 0-62mph takes 10.5 seconds, dipping to just 8.9 seconds for the 158bhp model fitted with a six-speed manual. The latter is also offered with a seven-speed dual-clutch automatic gearbox, but this adds a second to its 0-62mph time.

Even though the 1.5-litre diesel doesn't make the Qashqai a fast car, it has plenty of power for motorway cruising so we'd recommend it over the larger diesel. A 0-62mph time of 12.3 seconds is adequate for a high-riding family car like this, especially when its low fuel consumption is taken into account.

If you want more power, a larger 1.7-litre diesel is available with 148bhp, 20bhp more than the old 1.6 dCi. Zero-to-62mph is much sprightlier at 9.5 seconds, although choosing the auto gearbox with this engine makes it noticeably slower. It's also the engine you'll need to choose if you want grip-enhancing four-wheel drive coupled with Nissan's Xtronic automatic gearbox.

It uses a CVT (continuously variable transmission) and although these gearboxes usually make the engine sound like it's working particularly hard, this one successfully mimics a traditional automatic gearbox. That makes it a good choice if you expect to do a lot of driving around town it makes the car slightly more economical too.