Despite looking like an SUV, the Nissan Qashqai offers frugal diesel engines that make it particularly cheap to run

The Nissan Qashqai takes the form of a compact SUV, but offers running costs in the same ballpark as more conventional family hatchbacks. It’s unlikely to cost much more day-to-day than a Ford Focus or Vauxhall Astra. 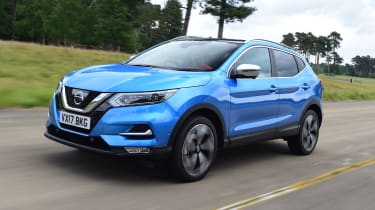 The Qashqai is impressively cheap to run when compared to conventional SUVs. The most economical version is the 113bhp 1.5-litre diesel, which is only available with front-wheel drive, and it’s capable of 53.3mpg regardless of whether you choose the six-speed manual or the seven-speed DCT automatic. Its CO2 emissions range from 139-143g/km with 16 or 17-inch wheels fitted. It was heavily updated in September 2018, with almost every part modified to meet the latest emissions standards. This includes Selective Catalytic Reduction (SCR) technology that requires occasional top-ups of AdBlue fluid. It’s the diesel engine that we recommend for most drivers, as it offers enough power to be relaxing on the motorway, while still being fuel-efficient over long distances. Company-car drivers can expect to pay a lower rate of Benefit-in-Kind (BiK) tax.

Picking the more powerful 148bhp 1.7-litre dCI diesel engine with front-wheel drive means fuel economy only drops to 48.7-51.4mpg. This engine can only be specced with a manual gearbox and emits 145-151g/km of CO2. Opting for the four-wheel-drive model with a manual gearbox means you can expect up to 47.9mpg and emissions of 155-161g/km. Choose the seven-speed automatic gearbox with this engine and fuel economy takes a hit, falling to 42.8mpg. Emissions are also increased to 173-183g/km, placing it in the top BiK band for company-car drivers.

You can choose from two versions of a 1.3-litre DiG-T petrol engine, and Nissan claims that both the 138 and 158bhp variants return the same fuel economy and emissions figures when equipped with a six-speed manual gearbox. But exact running costs depend on the size of wheels fitted. The standard 17-inch alloys are claimed to return up to 41.5mpg and CO2 emissions of 153g/km. That means a mid-range BiK rating. Upgrade to the 18 or 19-inch wheels and economy drops to 39.2mpg, while CO2 emissions increase to 162g/km for a slightly higher BiK rating. Going for the seven-speed DCT automatic gearbox, which is only available with the 158bhp variant, reduces economy to 38.2-40.4mpg and increases emissions to 156-161g/km.

Every new Qashqai will cost £150 a year in road tax.

Insurance starts at group 14 for the 138bhp 1.3-litre petrol Acenta, rising to 18 for the 168bhp version. The higher-spec Tekna rises to group 20 in 158bhp form. Meanwhile, diesel cars start in group 18. Qashqai insurance seems generally higher than for a Kia Sportage, but comparable to a Ford Focus.

All Nissans come with a three-year/60,000-mile warranty, which is about average for this class. However, it's worth remembering that the Hyundai Tucson comes with a five-year warranty and the Kia Sportage has a seven-year warranty. Interestingly, the mechanically-identical Renault Kadjar also has a five-year warranty.

Nissan offers fixed-price servicing and the Qashqai's service intervals are every 12,500 miles for petrol models and every 18,000 miles for diesels.