With its concept car-style dashboard, the Peugeot 5008 is exceptionally cool inside

Is your car’s dashboard made of black plastic? Does it feature rotary dials below an infotainment screen? Is its gearlever the same as almost every gearlever you’ve ever held? If you’ve answered yes to those questions and fancy a change, look no further than the Peugeot 5008 – it sure is different, and makes a welcome change from the conventional familiarity of the Skoda Kodiaq, for example. 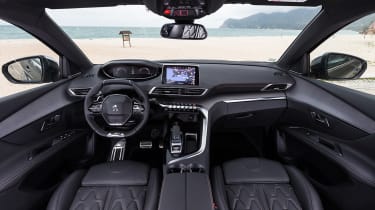 The piano-style keys, cloth inserts and digital dashboard may look cool, but they’re also very well made, lending the 5008 a distinctly premium feel. The wraparound dashboard design promotes a pleasant feeling of protection and, save for the almost-identical Peugeot 3008, there’s nothing else like it on sale today.

Peugeot has taken the generous decision to fit all 5008s with its i-Cockpit digital dashboard. It’s a neat system that allows you to view route guidance from the sat nav, say, without having to glance away from the dead-ahead.

Something you may have to glance away for, annoyingly, is the air-conditioning. You know those rotary dials we mentioned above? They’re a default style of switch for a reason, as they can be operated intuitively and by touch alone. The 5008’s heating and air-con controls are brought up by one of the seven silvered piano keys, which is a neat concession, but once selected, you’re forced to use the touchscreen if you want to change a setting. This is about the only negative in the whole interior though, and it’s one we’re willing to overlook.

The 5008 range is split into four trims. Active marks the entry point and is followed by Allure, GT Line and GT Line Premium with GT topping things off. In addition to the i-Cockpit and eight-inch touchscreen, all 5008s get Apple CarPlay and Android Auto, as well as autonomous emergency braking, traffic-sign detection and a driver fatigue monitoring system. 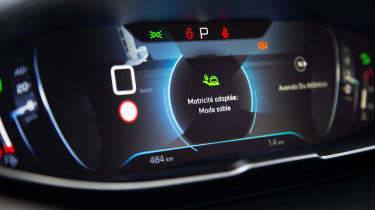 The Allure trim – with its auto-dipping headlights, sat nav, 18-inch alloy wheels and part-leather seats – is likely to be the pick of the range. GT Line and GT include features such as massaging seats, wireless phone charging and LED headlights, but are considerably more expensive. Note that if you want the 148bhp diesel engine, Peugeot will ask you to step up the GT Line. Introduced in early 2018, GT Line Premium adds extra kit like keyless entry, a powered tailgate and massaging front seats to the GT Line trim. There’s also an opening panoramic sunroof surrounded by ambient lighting and 19-inch two-tone alloy wheels.

Metallic paint should come in at around £600, while convenience-boosting features like keyless entry (£350) and a powered tailgate (£750) are also likely to prove tempting. The standard stereo system can be upgraded to a FOCAL premium speaker system for around £600 and in Allure trim level models. It's also possible to add a wireless smartphone charger for £120.

Full LED headlights and front foglights can be added to the Allure trim for £850, while an opening panoramic glass roof costs just under £900. You can also upgrade the alloy wheels for around £300.