The omens are excellent for the Peugeot 5008 when it comes to safety, and reasonable where reliability is concerned.

Perception’s a funny thing: if you ask people which carmakers have poor reliability, French manufacturers often crop up. Yet Peugeot came eighth out of 30 brands in our 2020 Driver Power customer satisfaction survey, beating the likes of Audi, BMW and Volkswagen.

It's a marked improvement on Peugeot’s 17th-place finish in 2016. Given the 5008’s mechanicals are used by at least four different models of car, we’d say it’ll be as thoroughly developed as is possible. 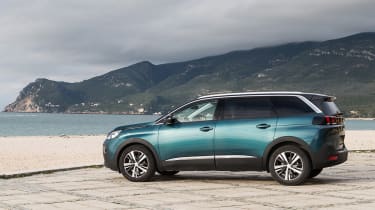 Autonomous emergency braking (AEB) is one of the most significant safety systems to have emerged in recent years, and is likely to be made mandatory very soon. Until then, it’s up to carmakers whether they want to fit it and, if so, whether they charge extra for it.

Peugeot has taken the admirable option of fitting all 5008s with AEB as standard. Given experts consider it can cut rear-end collisions by as much as 38%, we’re pleased this is the case.

The company also fits a tiredness detection system as standard, as well as lane-departure warning and traffic-sign recognition. This last item uses a camera to scan for signs, before displaying them on the i-Cockpit. Much like the i-Cockpit sat-nav display, this saves you having to search for pertinent information on the move.

These systems are also standard on the smaller Peugeot 3008, which scored the full five stars when Euro NCAP assessed it. We reckon it’s fair to assume the mechanically similar 5008 will fare just as well if it’s tested for crashworthiness.