The Peugeot 5008 is a big, practical car, but it’s not quite as well thought-out as we’d like

Going for a seven seater SUV should ensure you get a car that’s been thoroughly designed and expertly thought through, but the 5008 has one or two niggles that simply shouldn’t be present. It’s still large, practical and easy to live with overall, though. 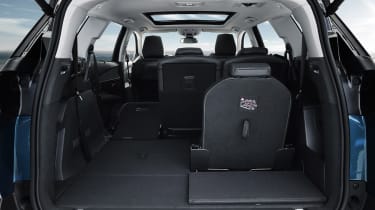 Front-seat passengers have nothing to worry about: the 5008 is comfortable and spacious here. Larger adults in the second row will curse any 5008 owner who goes for the panoramic sunroof, though, as we found this caused the car’s roof to touch the heads of six-footers. Legroom is excellent, however.

The third-row seats are tight. Getting into them is easy enough, but you won’t want to spend much time back there. Smaller children shouldn’t mind, but larger kids are likely to feel squashed. This, in fairness, is a hallmark of many seven-seat SUVs (and some MPVs), but we suggest going for a larger SUV like the latest Land Rover Discovery if you plan on travelling six or seven up regularly (and you can stretch to it) or the Renault Grand Scenic MPV if you want to keep costs down.

With all seven seats in place, boot space is tight – but again, this is something of a given. Drop the rear row of seats, however, and you’ll have a vast 780-litre boot. 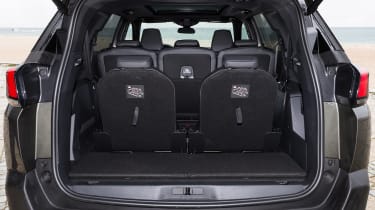 Lowering all five of the rear seats is simple enough, but once dropped, two problems present themselves. The first of these is the flaps, which smooth the slight ridge between the boot and the backs of the dropped second-row seats. We can forgive this, largely because these flaps make sliding long items in reasonably easy – although not as easy as a flat load floor would make it.

What’s less impressive is the gap that exists between each of the second-row seats when they’re folded. The two crevices that are present between the dropped seats will swallow up small items, and simply shouldn’t be there – other manufacturers manage to marry the seatbacks up perfectly, and we’re puzzled why Peugeot hasn’t.

If you plan on using the Peugeot 5008 as a tow vehicle, you'll need to play close attention to the version you buy because it can make a marked difference. By far the top dog is the 2.0-litre 175bhp diesel, with a capacity of 1,800kg for a braked trailer but this drops to just 1,200kg for the 1.5-litre BlueHDI with an automatic gearbox fitted.