If you’re after relaxing journeys, the Peugeot 5008 is a good car to drive

Judge a fridge by its ability to cook your food and it’ll be a failure. By the same token, expect the Peugeot 5008 to handle like a hot hatchback and you’ll be disappointed.

Let’s get the negatives out of the way first: the 5008’s steering is a little woolly and artificial-feeling, while its height and soft suspension translate to a fair degree of body lean when cornering with brio. The manual gearbox, meanwhile, is smooth enough, but the gearlever feels too big in the hand – although this may well be easy to get used to. In contrast, the small steering wheel feels out of place in a big SUV.

As a 5008’s driver only makes up 14.2% of its potential occupants, however, Peugeot’s decision to prioritise comfort over thrills makes a great deal of sense, has been executed successfully and is likely to be welcomed by passengers.

The 5008 is quiet and settled at motorways speeds, with the suspension insulating you expertly from such trifles as cat’s eyes and lane demarcations. On smaller, rougher roads it’s even more impressive, with big bumps and prominent potholes being absorbed with maximum efficacy and minimal fuss. 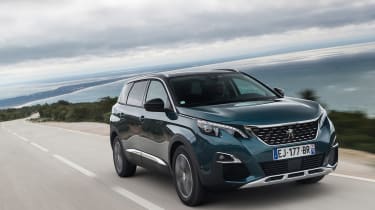 The 5008’s engines are familiar from the rest of Peugeot’s range and the 128bhp 1.2-litre and 163bhp 1.6-litre are equally smooth turbocharged affairs. If you’re considering the smaller of these, we advise taking the whole brood along on a test drive, as 128bhp isn’t a huge amount of power with which to shift seven people.

However, the 1.2-litre 5008 is impressively light – weighing around the same as a family hatchback – so it matched the more powerful Skoda Kodiaq during most of our in-gear acceleration tests. Despite being smaller, it also feels more flexible and refined than the Nissan X-Trail’s 1.6-litre petrol engine.

The diesel engines are likely to be bigger sellers, and the 175bhp 2.0-litre is reasonably quick, getting from 0-62mph in 9.2 seconds. It comes with a standard eight-speed automatic gearbox, but we expect most buyers will choose a version lower down the 5008 range.

The 1.5-litre BlueHDI can be had with a six-speed manual or the automatic, and its 129bhp should be enough for most drivers, getting it from 0-62mph in 11.1 seconds.