Despite its size and seat count, the Peugeot 5008 should be cheap to run 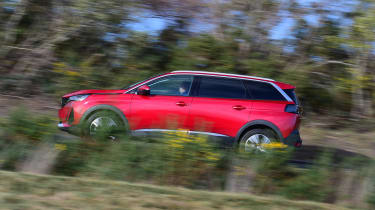 Modern manufacturing techniques mean blending lightness with strength is now easier than ever, so despite being a big car, the Peugeot 5008 is pretty lithe and frugal. Most of the engine lineup has remained relatively unchanged for the facelift, however, and the lack of a hybrid may see the 5008 start to fall behind new arrivals.

The 1.5-litre BlueHDi diesel can manage up to 60.8mpg, while the optional eight-speed automatic is still capable of fuel economy of up to 57.8mpg and CO2 emissions from 128g/km. The manual 1.5-litre diesel’s CO2 emissions span from 122-148g/km.

With 175bhp, 2.0-litre Blue HDi diesel is paired with an eight-speed automatic gearbox, and up to 51.1mpg is possible, while CO2 emissions increase to at least 145g/km.

All 5008s will cost £150 a year to tax. The car could conceivably reach and breach the £40,000 mark if you go for top-spec GT Premium trim and add lots of options, though. If you’re one of the few people to configure a 5008 to be this expensive, add an extra £325 to your annual road-tax bill the first five times you tax it.

Insurance groups start from 20 and 21 for the 1.2-litre petrol and 1.5-llitre BlueHDI and increase to 29 for the top petrol and diesel engines with circa 180bhp.

Peugeot offers fixed-price servicing packages lasting for three, four or five years, that are fairly priced at around £15 a month.